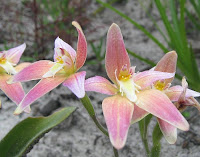 
A very attractive hybrid between Caladenia latifolia and Caladenia flava, which in my opinion has reproduced the most spectacular features of both species, particularly the flowers to 40 mm diameter (nearly 2"). This is a common union between these orchids, which in this instance occurred in alkaline sand over limestone where both species were very common. The above was a small group of plants contained within half a metre square (around 1' 6") and were obviously closely related.


Update 25/09/08
I came across another colony of this colourful orchid hybrid, and as they are such pretty plants I include another photo. This time it was a much larger colony of 200-300 plants all growing in an area a little over one square metre. Habitat was a shallow sand/clay loam over granite in a recently burnt wheatbelt flora reserve to the NE of Esperance.