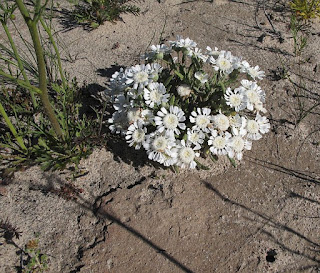 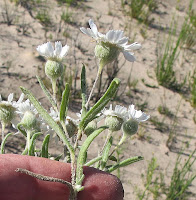 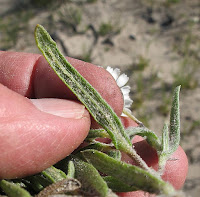 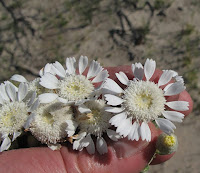 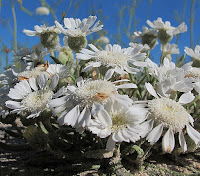 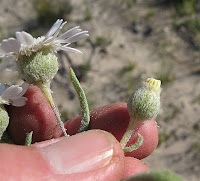 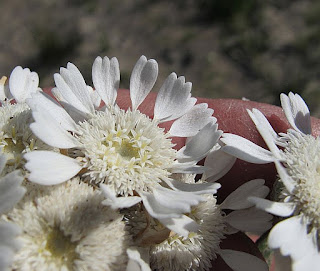 This exotic looking plant that you might think was a garden escapee, is in fact a WA endemic, but is rarely seen and only encountered after bushfires. It favours sand and sand/gravel soils from Geraldton (north of Perth) to Israelite Bay (east of Esperance), but is excluded from the wetter SW corner.   Locally it is rare and the few plants I have seen were in mallee heath a little north of the cleared wheatbelt farming zone, where I suspect they originally grew in greater number.

The showy white flowers are to 2.5 cm (1”) diameter, so are very eye-catching especially after fire and in the sparse early stages of regeneration. They are not regarded as rare or endangered elsewhere, so finding them in large numbers (August to November) must be quite spectacular.

To the east of Albany, there are no other native species that resemble this plant, and being so distinctive, it is unlikely to be confused with any other. However, there are three additional Asteridea species in the Esperance region, but these lack the radiating ray florets, having only tubular ones that produce a “billy-button” type flower head.

There are two similar looking species west of Albany, but both of these have smaller flowers. One is A. pulverulenta the Common Bristle Daisy, which besides the flower size, also has simple pappus bristles (not plumose), plus is largely restricted to coastal districts (Albany to Geraldton). A. gracilis the other similar looking plant is rare, and only found around Perth and the Albany districts.


Asteridea was until recently placed in the Athrixia genus, but now that only contains South African plants.  Asteridea belongs to the very large and highly diverse Asteraceae family.

Posted by William Archer at 4:15 PM