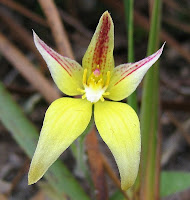 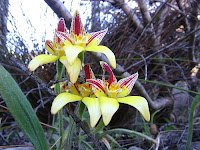 This very common and widespread orchid is almost weed-like by quickly colonising disturbed or recently burnt ground. It can develop into massive colonies of hundreds of plants and when each flower is around 50 mm (2"), it is quite a sight. It does not need a fire to induce flowering, but will do even better when there has been one.

The subspecies flava is the only one in the district, with others occurring west of Albany, so cannot be confused with other species. Very common in heathland and around granite outcrops. It can flower from July to December, but more usually from August to November, the flowering period being dependant on early or late season rainfall.