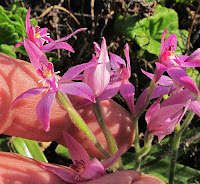 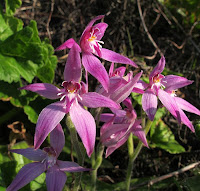 
A very common orchid that can even be found on waste ground within large towns and cities. It favours alkaline sands and areas of limestone, but can be found in a variety of other habitats too. It does well after summer bushfires, but will flower well until the area becomes overgrown by other vegetation, when it will wait until another fire or the denser vegetation is removed.

Pink Fairies have a large flower to 40 mm (11/2"), so not easily missed. White forms can also be found along with numerous shades of pink. They are sometimes found in sizeable colonies, although more usually in small groups. Normal flowering time is between August and October.