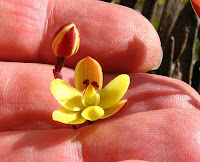 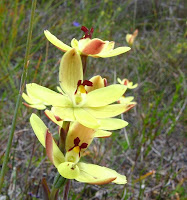 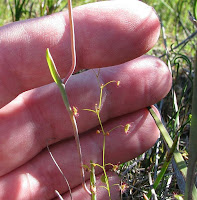 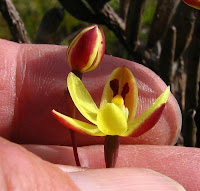 
Due to the two large upright lobes at the rear of the column, this sun orchid is also known as Rabbit's Ears. Personally I think it also resembles a cute little dog, but whatever you think, this orchid has a lot going for it. It would be the most common of the WA Sun Orchids, growing in a variety of moist habitats and although doing particularly well after summer bushfires, it can still be commonly found in low vegetation and along walking tracks in unburnt areas.


Apart from the cute little faces, the flower is also heavily lemon-scented, presumably to attract insect pollinators. This is further aided by large yellow flowers (to 30 mm, over 1" diameter), that open freely and can be seen in full bloom even on cloudy days.


Growing to a height of around 250 mm (10"), the flowering stem is kinked at the nodes and on casual observation looks very similar to another orchid, Thelymitra flexuosa, the Twisted Sun Orchid, which also has yellow flowers and grows in similar habitats (for further details see 'Orchids - Sun - Twisted').


In some areas it can apparently flower as early as July, but in the Esperance region September and October would be more the norm.