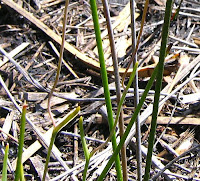 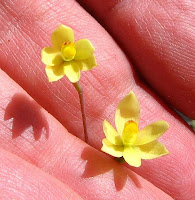 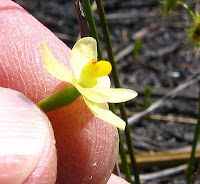 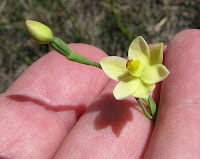 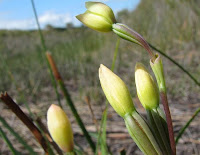 
A reasonably common orchid of seepage zones, around ephemeral swamps and granite outcrops. The flowers are often not closely examined, as they need a calm sunny humid day to open, if these conditions do not occur, they may not open at all and self-pollinate. It derives its name from the zigzag bend in the stem, which you might think would make it highly distinctive, but another even more common orchid, Thelymitra antennifera, the Lemon-scented Sun Orchid also has a zigzag stem, its flowers are also yellow and it occupies similar habitats at similar times, so the Twisted Sun Orchid with usually closed flowers, is often mistaken for the more common orchid.


Update 11/10/08
Photo of the closed flowers added to show the yellow exterior, as compared to the similar looking orchid T. antennifera that has a pink/red exterior.

Posted by William Archer at 6:31 PM