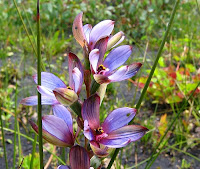 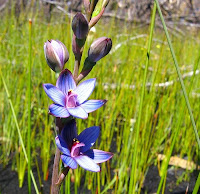 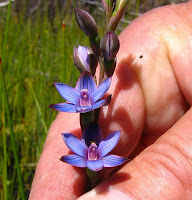 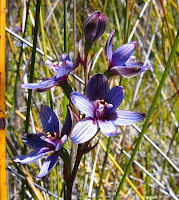 This sun orchid was previously known as Thelymitra azurea, as it has striking purple/blue flowers matching the common name of Azure Sun Orchid. Commonly found in low-lying heath around winter-wet swamps and seepage zones, but can also be encountered on sandy rises near saltlakes. It flowers particularly well after a summer bushfire, but will still do so without, providing the area has not become overgrown.

Apart from the color, the most distinctive feature of this orchid is the raised yellow lobes on the rear of the column. It stands around 400 mm (1' 4") in height, with flowers to 30 mm or a little over one inch diameter; these are produced on warm sunny days. Flowering is from late September, but more usually during October and November.

Posted by William Archer at 4:02 PM