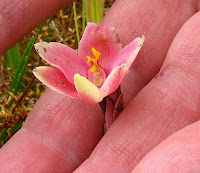 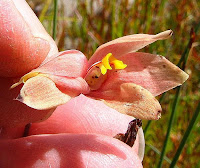 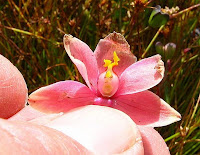 
This Sun Orchid hybrid is a bit of a mystery as to who its parents are. It seems likely due to the large column wings, that one is Thelymitra antennifera, the Lemon-scented Sun Orchid, which is very common in the area, and the other being one of the blue colored species (in order to produce the pink petals). There are several blue flowering sun orchids in the region, but the hybrid flower is much larger than most of them, being at least 40 mm (nearly 2") diameter. There is only one species (presuming the hybrid flower size is related to the parent orchids flower size) that is found nearby, and that is Thelymitra macrophylla the Scented Sun Orchid. Here: Orchids - Sun - Scented

There were around a dozen plants (most had finished flowering), growing within a few metres of each other, at the base of a sandy rise on the edge of a saltlake, but behind tall bushy Melaleuca species. So a protected and probably moist position with a sandy surface, shallowly overlying a heavier clay substrate (interestingly a habitat also favoured by T. macrophylla).

The photographs above were taken in mid October, the aftermath of a summer bushfire. So the main flowering period would be September to early October. This is compatible to the flowering times of the suggested parent orchids. I have returned to the site in following years but have not encountered the hybrid again. Whether this is due to a lack of rejuvenating bushfires, rapidly regenerating (smothering) vegetation or for some other reason, I cannot say.