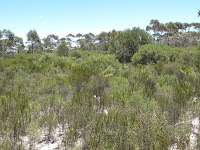 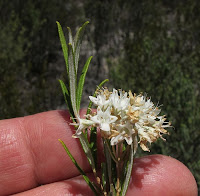 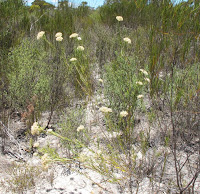 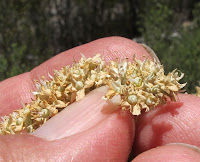 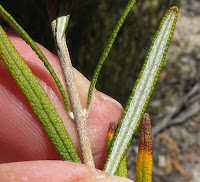 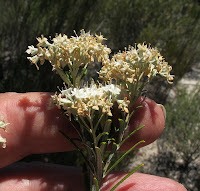 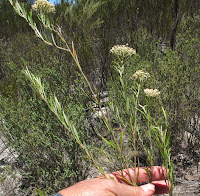 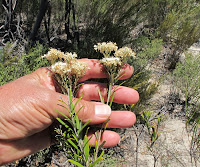 
Dicrastylis in WA is now placed into the Lamiaceae family, but depending on the classification being used, may still be listed in Chloanthaceae by some authorities. Plants in this genus are shrubs with a dense covering of cotton/woolly hairs, particularly along their branches; their flowers are mostly five lobed (one larger than the other four) with five stamens, although Dicrastylis archeri differs by having either four or five lobed flowers and commonly only four stamens.

This species, plus Dicrastylis capitellata (see: http://esperancewildflowers.blogspot.com/2011/01/dicrastylis-capitellata-lamiaceae.html), were both only discovered in 1990 NE of Esperance after a bushfire had passed through the area. D. capitellata is more common and occurs in a number of widely scattered compact colonies, although being a smaller plant, is quickly overgrown and disappears within a few years. D. archeri on the other hand is more restricted and only found in three colonies within 10 km (6 miles) of each other and approximately 20 km NNE of Mt Heywood. Apparently, another colony has been more recently discovered around 400 km west of the above colonies in the Lake Grace region, but I know nothing of these plants, except to say there is a considerable amount of poorly known bushland between, so possibly Dicrastylis archeri will also be found there.

Dicrastylis archeri has a Priority One Conservation Status, which means it is known only from less than 5 populations and is urgently in need of further survey. It is a spindly upright plant growing to around 1.2 metres (4’) high in sandy hollows, often in open mallee woodland with scattered Banksia media and a variety of heath plants. As D. archeri is over twice the height of Dicrastylis capitellata, it can survive competition from other shrubs for ten or so years, but by then their numbers are greatly depleted. Their white flowers fade to cream and form terminal floral clusters that are produced during November and December.