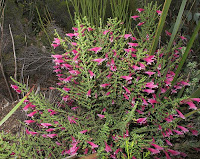 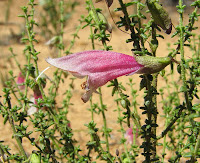 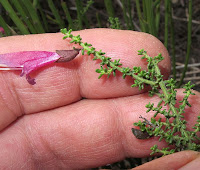 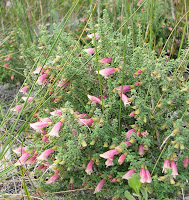 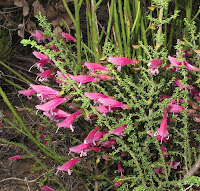 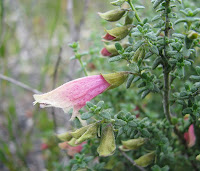 
Prostanthera serpyllifolia has two subspecies, this one and subsp. serpyllifolia, the latter being quite rare in the Esperance region. Subsp. microphylla is more frequently encountered and can be found in a variety of habitats from coastal regions to the inland mallee where more common. Generally it prefers sandy non-calcareous well-drained loams, over heavier loams or clay (in hollows) or overlying limestone (typical of the mallee and Nullarbor).

Prostanthera serpyllifolia subsp. microphylla the Small-leaf Mint Bush is aptly named as the leaves are under 4 mm (3/16”) in length, plus the leaf stalks (petioles) are also very short being less than 0.5 mm. The leaves tend to be clustered in small bunches and spread along the stem, plus the calyx (under the coloured flower) is less than 8 mm in length. With the other subspecies (subsp. serpyllifolia) all the above are larger and the leaves are not clustered along the stem. For more information concerning this subspecies, see http://esperancewildflowers.blogspot.com/2011/03/prostanthera-serpyllifolia-subsp.html

The hairs on the Small-leaf Mint Bush tend to be more numerous, particularly along the branches, but hairiness generally can be quite variable between populations. Due to the small and often spaced leaf clusters, Prostanthera serpyllifolia subsp. microphylla has a more open structure and can appear a little twiggy. It grows to around ½ metre (18”) in height, commonly in compact colonies after fire or soil disturbance.


Flower colour is another variable feature, differing from red to pale pink, but more frequently with a mixture of hues. Due to this species preference for drier environments, it is officially recorded flowering in WA from April to December (occurs north of Albany, then east across the Nullarbor into SA, Victoria and NSW), however this timing can vary considerably as different colonies respond to local weather conditions. Around Esperance, between August and November would be its customarily flowering period.  Flower size is similar to subsp. serpyllifolia of around 2 cm (3/4”) in length.