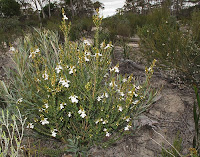 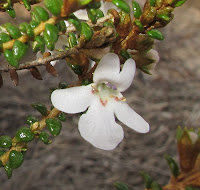 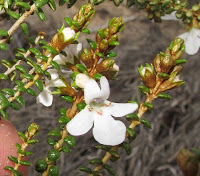 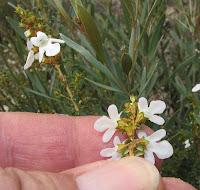 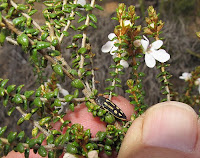 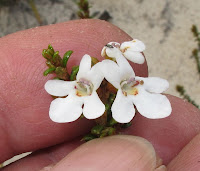 
The Lamiaceae family contains of a number of ornamental plants with the Mint Bushes probably the best known. Their flowers are 2 lipped, with one to four lobes originating from a tubular base. Plants from the Pityrodia genus have flowers with three large lobes on the lower lip and two smaller ones on the upper, plus generally this group has small scale-like leaves from which the genus name Pityrodia is derived. The species name of chrysocalyx is also aptly named, as chryso = gold and calyx = cup (in which the flower sits), referring to the external golden color of the calyx.

Pityrodia chrysocalyx is endemic to a relatively small region from Esperance to Norseman and west to the Lake Meads and the Pyramid Like district (120 km or 75 miles NW of Esperance), where most common. It has been given a Priority Three conservation status, which means the species is known from several populations that are not under any immediate danger, but the species is in urgent need of further survey. The main area where Pityrodia chrysocalyx is found is undeveloped, but near the outer boundary of the current wheatgrowing area and where plots have been surveyed and pegged for future development.

This golden calyx shrub grows to around a metre (3’) in height and forms a bushy well shaped plant with glossy green leaves. The flowers are to 1.5 cm (5/8”) in length and are snow white to contrast effectively against the dark green foliage, plus the golden calyx adds an additional attractive feature. Like many plants in the Lamiaceae family, they benefit from bushfires as they clear away plant competition and stimulate germination; the resulting plants will then persist for several years, but slowly fade away until the next fire.

The habitat is an open woodland in a good sandy loam that is also favoured for growing wheat, which may create future land use conflicts. The area had been selectively burnt about 2 years ago and Pityrodia chrysocalyx shrubs were common in a relatively compact colony, but were not widespread. Flowers were in bloom from July to October.

Update October 2011
This species is very common near Lake Tay via the mine access road.