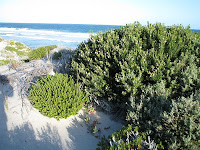 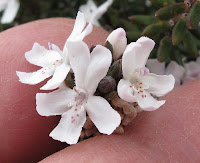 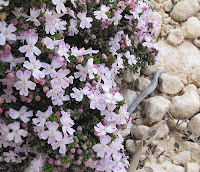 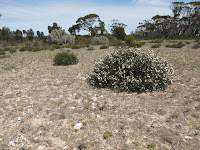 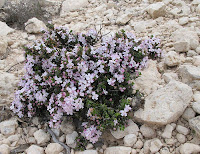 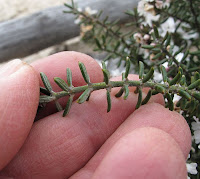 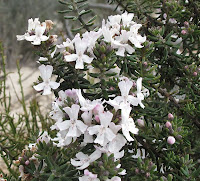 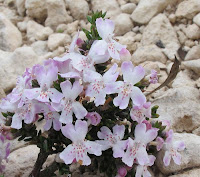 
The genus Westringia is another to be transferred to the Lamiaceae family from Labiatae, although some authorities may still recognise the older classification system. Westringia plants have long been used in home gardens, particularly near the sea, as many are known for their hardiness in dry sandy soil combined with salt spray. Westringia dampieri is one of the most ornamental species suitable for these conditions and forms compact well shaped shrubs.

As the common name of Shore Westringia suggests, it is mainly found close to the sea from south of Carnarvon WA, around most of the coast and across the Nullarbor into SA, where it extends as far as Kangaroo Island. However in the Esperance region it also occurs in the inland mallee region and can be found on breakaways or where limestone is close to the surface. In this region it sometimes overlaps with Westringia rigida that is very similar in appearance, although that species tends not to be as bushy, the flowers are always white and the leaves are sessile (without stalks). Westringia dampieri on the other hand is usually bushy, has leaves with small stalks and flower buds that are commonly pink and the corolla sometimes mauve, pink or purple.

Westringia dampieri grows to around 1.5 metres (5’) in height, although usually shorter and forming a compact dome shape. It grows in deep calcareous sand, or directly on broken limestone, often too harsh for other species, so plant competition is seldom a survival issue. Therefore many Westringia species are not as reliant on periodic bushfires as others in the Lamiaceae family, although they still appear to benefit by producing numerous seedlings, of which those (by chance) finding deep fissures for root penetration, are the ones most likely to survive long term.

The Shore Westringia can usually be found with some flowers at almost anytime of the year, particularly during warm weather and after rainfall. Although locally from August to November is when they are at their best.

Posted by William Archer at 5:27 PM