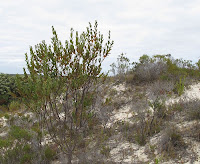 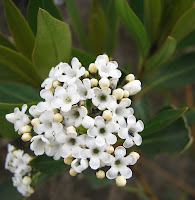 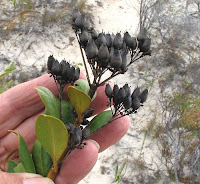 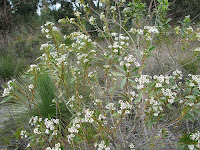 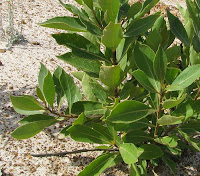 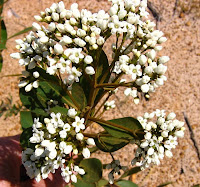 Loganiaceae is the family name of Logania, which are shrubs distributed throughout Australia although Western Australia has the greater number, currently twenty-two. Many are unisexual where flowers of different gender occur on separate plants, but with Logania vaginalis flowers are bisexual. Leaves (when shrubs are not leafless) are opposite along the stem and the Forget-me-not like flowers mostly white and often clustered.

Logania vaginalis is a slender upright shrub, distributed from Cape Arid (110 km or 70 miles east of Esperance) around the coast to Geraldton. Growing in excess of 3 metres (10’) although mostly only half this height, it prefers the calcareous sands sometimes over limestone, but will tolerate other well-drained soils and is commonly found along coastal or near coastal roadsides in disturbed soil. The leaves of this species are amongst the largest of these plants and when young can be 10 cm (4”) in length, although shorter on mature shrubs.

The dry seed is produced in top opening capsules and spills out as the plant sways and bends in windy weather. Plants remain viable for many years, although benefit from fires or soil disturbance that will encourage fallen seed to germinate. Mature shrubs when burnt or damaged can resprout from the rootstock, so although plants often look weak and spindly, once a colony becomes established it can outlast many other species. Logania vaginalis is a  non-agressive colonising plant and will help stabilise soils after environmental disasters, but rarely interferes or restricts the growth of other species so is not weedy. Clusters of white flowers are produced from September to November.