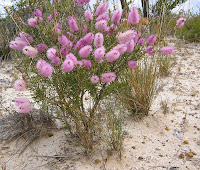 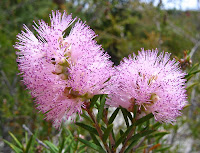 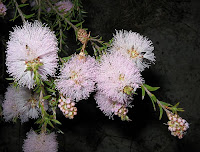 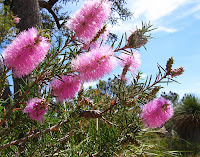 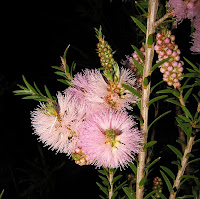 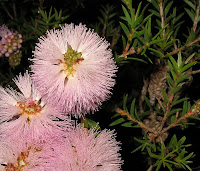 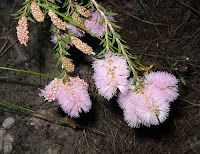 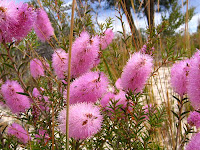 
There are a number of spectacular Melaleuca species of which Melaleuca striata is one. It is a very common shrub of mostly a metre (3’) in height, but can grow to more than twice that size if among taller plants and competing for sunlight. This bottlebrush grows in a variety of non-calcareous habitats, from deep very well-drained sand to periodically wet clay/gravel soils in low-lying areas, but generally it does not like wet feet.

Melaleuca striata is found to the NE and east of Esperance, plus to the west as far as Albany. Flower colour varies from a pale mauve to bright pinks and purples, with the deepest colours invariably encountered on gravel soils. This species has a spreading habit to 2 metres (7’) or more diameter, with the branches arching or pendulous; the foliage is pointed, but not sharp enough to pierce the skin. The numerous flowers are to 5 cm (2”) in length and 2.5 cm (1”) diameter.

Normally this species flowers prolifically between November and January, but flowers can be produced earlier and later depending on weather conditions. Locally the mass flowering period can be cut short by heavy thunderstorms, which have a habit of appearing just when they are at their peak. However, blossom is produced for sometime later, but not as lavishly as the initial flush. Although birds may check out the flowers, insects are their main pollinators.

Posted by William Archer at 6:06 PM