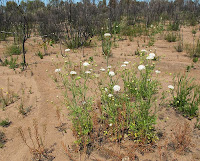 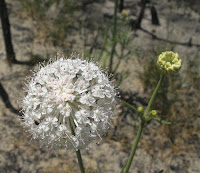 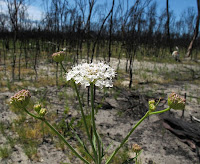 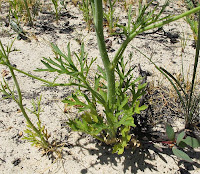 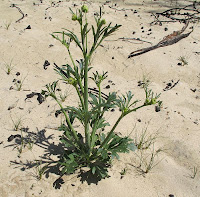 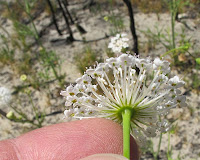 The Trachymene genus has had several re-classifications in recent years and when I first came across these plants, they were sensibly placed in the family Umbelliferae as their flowers are grouped together in umbels, which was fine as it was easy to remember and contained all the then known species. Later it was placed into the Apiaceae family, which although more difficult to remember, still contained all species. However now (at least in WA), it has finally come to rest in the Araliaceae family, which I find not only more difficult to remember, but it contains only some of the original genera.

The single seeded carpels that comprise the fruit of this genus are known as monocarps. Usually two sit together edge on and separated by a membrane, but with this species there is usually only one monocarp to give the maturing flower a pronounced pouch. Trachymene anisocarpa has two varieties and both are within the Esperance region. The above variety, var. trichocarpa is known from the North and NE of Esperance, whilst the other var. anisocarpa is from the West and NW of the town. They differ by var. trichocarpa having fruits with hair-like bristles, but var. anisocarpa have none, although only evident on mature fruits.

Trachymene anisocarpa var. trichocarpa is an annual and endemic to WA; it has a Priority Three conservation status, meaning it is known from several populations and in need of further survey. However, this plant occurs in their millions over large areas after fire in the mallee region, but is only evident for one or two years, so unless noted soon after will go unrecorded, which I suggest is the case in this remote region. The soils are typically a fine windblown clay, which is mixed with sand that is often windblown too, or of larger alluvial grains eroded from granite outcrops.

The plants are also known as Native or Wild Parsnips and commonly grow to 75 cm (30”) in height, but amongst rocks and other sheltered positions they can reach twice that height. All flowers seen have been white, but blue ones are also recorded. The flowering period is from October to December.