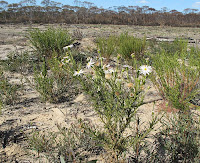 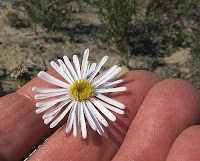 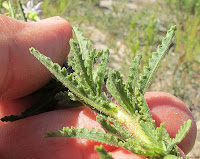 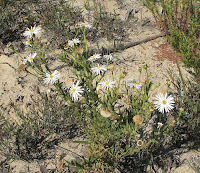 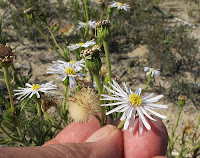 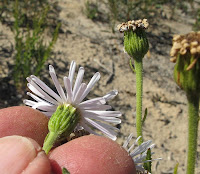 Most plants in the large Daisy family Asteraceae, are short-lived herbaceous species, but those in the Olearia genus are longer living woody shrubs. Olearia laciniifolia is found in the treed inland mallee region from Mt. Ragged to Lake Grace, but is usually represented by only a few plants in widely separated colonies and then mostly after fire or soil disturbance. I suspect the seed is either short lived or destroyed by hot fires, as plants tend to be at the cooler edge of fire zones.

Generally this daisy bush is found on gentle slopes and hollows in the deeper sandy loams (over limestone), or near playa lakes, or eroded sandy loams from low-lying granite outcrops. Despite the extensive range of Olearia laciniifolia of over 450 km (280 miles), it only occurs in a narrow strip of land and only then in small-scattered colonies. It currently has been given a Priority Two conservation status, which means this species is known from only a few populations and is in urgent need of further survey. I know of a number of populations, but overall there are relatively few plants.

Olearia laciniifolia grows to a little over 1 metre (4’) in height with an open structure. The flowers are white or pale pink with a yellow centre and grow to 4 cm (13/4”) diameter. The unusual and distinctive leaves are strongly toothed but not prickly, they have glandular hairs therefore are slightly viscid and odorous, although not unpleasantly so. Flowering is very much influenced by weather conditions and although mostly blooming during winter/spring, this timing is variable with blossom commonly found outside this range during cool periods after rainfall.