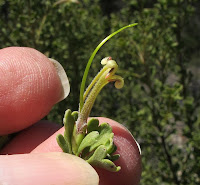 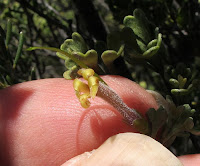 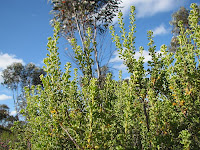 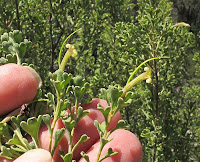 
The Adenanthos genus is part of the Proteaceae family and similar to the Grevilleas, except the flowers are singular and not grouped together, plus the anthers of Adenanthos (unlike Grevillea) have a small appendage at their tip. Adenanthos ileticos is an inland mallee species restricted to sandy rises to the North and NE of Esperance and is common within 20 km (12.5 miles) north and east of Mt. Ridley, although not within several kilometres of the mount. Currently this species has a Priority Four conservation status, which is listed as Rare Flora, but not under any immediate threat.

The region where the Club-leaf Adenanthos is common, is difficult to access and probably has not been surveyed adequately and in my opinion this species does not warrant its rare status, although it is limited to a relatively small area so any future development could place it at risk. Adenanthos ileticos is a bushy grey/green shrub to around 2 metres (7’) in height and occurs in sandy soils with tall shrubby heath and open woodland.

The leaves are soft and shortly three lobed, whilst the cream to pale red flowers (initially difficult to see) are scattered singularly, especially at the summit of branches but also in some leaf axils. Although not particularly striking, these flowers are eagerly sort by honeyeating birds who are their main pollinators. The shrubs have a lignotuber from which new shoots sprout after bushfires, thereby providing these plants with an excellent survival mode by being able regenerate from the rootstock, plus establish new plants from seed.

Like many species in the low and irregular rainfall mallee region, opportunism to weather variation is strong and of which Adenanthos ileticos takes full advantage. It can therefore be found in flower at almost anytime, except during prolonged hot dry periods, which probably makes it a reliable food supply for birds that regularly check them out. Consequently, the necessity for bright colourful flowers in order to attract their attention would be of little benefit.