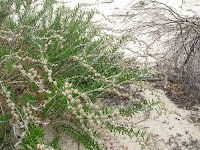 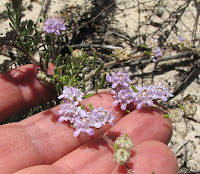 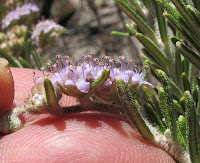 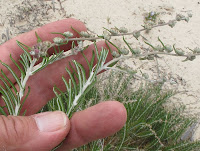 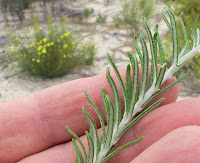 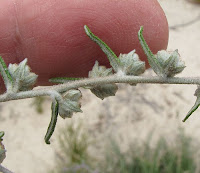 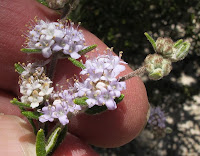 
There are a number of Dicrastylis species, but they are not well known possibly because most tend to grow in remote, out of the way places that are often hot and dry in summer, therefore seldom visited. Due to these isolating conditions, a number have only been discovered within the past 20 years, including this one. First discovered in sandy areas within mallee country 30-50 km (20-30 miles) to the North and NE of Mt Heywood, it a shrub to ½ metre (18”) in height and only occurs after bushfires to form localised but sizable colonies. These slowly die off over a few years, as developing larger vegetation begins to dominate light and moisture availability.

Mt Heywood is 85 km (50 miles) NE of Esperance and the region further north, where Dicrastylis capitellata grows is very poorly known. To illustrate that, you can go from there north to Broom (1700 km 1060 miles) and not encounter a single settlement, you will also only cross two bitumen roads. Most of this country however is desert and very difficult to access. Returning to Dicrastylis capitellata, I know it from several colonies in an area 20x30 km (12x18 miles), but apprantly it has since been found near Mt Holland, which is 190 km (120 miles) west of Norseman and about 300 km (185 miles) from the Mt Heywood colonies. So likely this species occurs in suitable habitat in the also poorly known country between.

Currently Dicrastylis capitellata has a Priority One Conservation Status, which means it is poorly known from less than 5 populations and due to its small population size is under threat. Personally I know it from more than 5 sizable colonies, which does not include the Mt Holland ones. However the problem with official records is those doing the recording must be at the site 2-4 years after a bushfire as no plants will be seen if visited at other times, .

In habitat, Dicrastylis capitellata favours sandy loam flats in low-lying areas over limestone, these regions normally support eucalyptus and Melaleuca species, which after bushfires leave only a narrow window for these plants to reproduce before they are crowded out. The pink/blue flowers form into small heads, which progressively come into bloom, moving from the base to the branch tips. These branches are unusual in that the portion with the flowering heads, bend outward almost 90 degrees, so all flowers form a near horizontal flat plain to provide unhindered access to pollinators.

The Herbarium website records Dicrastylis capitellata flowering in May, which I think is an error, or refers to the Mt Holland colonies, but those to the north of Mt Heywood are known to flower November to January. Some variation to this period may happen with unseasonal rainfall, but due to their robust flowering stems, I doubt if they could grow these quickly enough much outside these times, before the regions summer temperatures (commonly 35-40 degrees C or 100 degrees F) cause rainfall to evaporate.