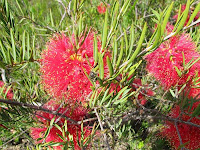 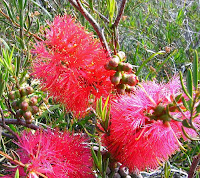 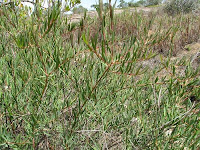 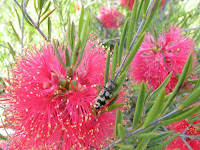 Scarlet Honey Myrtle - Melaleuca fulgens subspecies fulgens
A widespread shrub with large scarlet and gold bottlebrush flowers, and is particularly common on granite outcrops to the north and east of Esperance. There are two subspecies, but the other classified Melaleuca fulgens subspecies steedmanii is well outside this district and only occurs to the far NW towards Geraldton, so not of concern here. The subspecies fulgens is recorded growing to 3 metres (10') in height, but in this region seldom exceeds half that size and is commonly a shrub around 1 metre (little over 3') in height, but spreading around 2 metres.
The most attractive forms of this species are found on reasonably deep soils on granite outcrops, to produce 5 cm (2") diameter x 8 cm (over 3") long cylindrical clusters of bright red flowers. The 3 cm (over 1") narrow boat-shaped leaves are grey/blue to olive green and tend to grow vertically, however being narrow and spaced along the stems, the shrub has an open appearance and is not particularly eye-catching when not in flower.
With the often open nature of granite outcrops, the large brightly colored flowers of this honey-myrtle can be seen from some distance, thereby attracting both birds and insects that can be seen flitting from plant to plant. Flowering time is from August to December, with October/November being the best time to seek them out.
The flower of this plant is very similar to another granite loving shrub called Kunzea baxteri Myrtaceae - Kunzea baxteri but with that plant, its main flowering period is much earlier in the year and is usually well finished before this species begins to bloom.