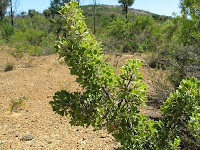 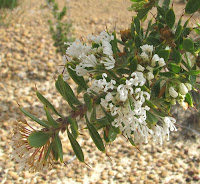 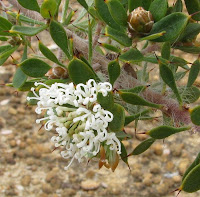 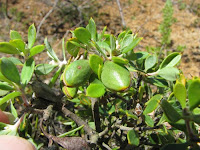 
This Hakea is not overly common in the Esperance region, but widespread from Albany to the north of Perth. Around Esperance it is to be found in open colonies to the east of the town, growing on gravelly clay soils over granite. Structurally this plant is very similar to Hakea varia Proteaceae - Hakea - Variable-leaved by growing long branches that are covered with short lateral, leaf covered stems, each of which carry a cluster of white flowers at their apex. As the congested flowers exceed the length of the leaves, they combine to give the impression of a stout rounded white candle.

The leaves are quite interesting, being elliptic but with an elegant long sharp point. To contrast, along their sides and at right angles (particularly near their base) are neatly arranged long soft white hairs. The 1.5 cm (over 1/2") smooth seed capsules are initially bright green and well camouflaged within the tightly packed leaves; these when mature dry to a brown color and annually fall unaided from the shrub without the need of a bushfire, so trying to find them at certain times of the year can be very frustrating.

Hakea ruscifolia is recorded as growing to 3 metres (10') in height, but here and Israelite Bay (their most easterly outpost), they seldom exceed a metre (little over 3'), but will spread for several metres. The summer concrete like, dry soils where this species occur, make the Candle Hakea very dependant on seasonal rainfall, therefore flowering is often highly variable and can occur anytime between December and June.

Posted by William Archer at 1:13 PM