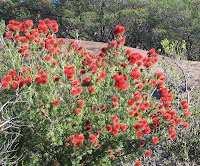 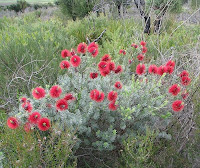 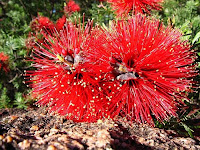 Common to the east of Esperance, growing on and around most granite outcrops from the coast to the mallee a 100 km or so inland. It is recorded as reaching 4 metres (over 12') in height, however I have never seen them that big in this region, but more like a spreading shrub of only 1-2 metres (over 3'-6') in height. This Kunzea species would have one of the largest Kunzea flower spikes rivalling many Callistemons (Bottlebrushes). The flowers grow to around 10 cm (4") in length x 6 cm (over 2") diameter, they are a brilliant red and eagerly sought by honeyeating birds.

This shrub is a very hardy plant and commonly grown as a garden specimen in many parts of Australia. As it favours the deeper soils over granite, it must be able to withstand quite wet conditions during winter, but very dry ones during summer, along with soils varying from a gravelly clay to an acid sand, so it is highly adaptable.

Kunzea baxteri mainly flowers during late winter/spring and sometimes in autumn and if there is reasonable summer rain, some flowers may be produced between, but July to September would be the most prolific flowering period.. The leaves are a grey or apple green and quite soft to touch. The seed capsules are quite large and initially leathery and unlike other plants with bottlebrush flowers, release their seed annually. The individual seed capsules are not attached to each other or strongly to the stem, so most of these also drop when they become dry and brittle.

Posted by William Archer at 3:28 PM