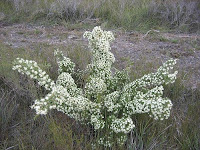 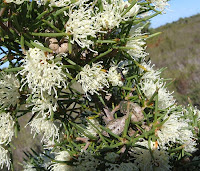 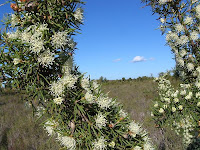 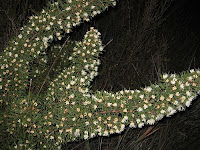 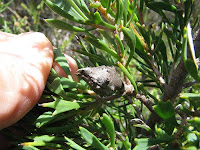 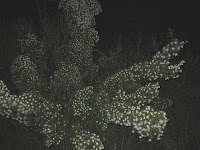 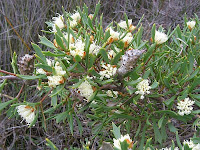 
Not only a shrub with variable shaped leaves (often growing together), but one with variable growth habits. A common species with a large distribution from near Geraldton (north of Perth) to Israelite Bay (east of Esperance) and in some habitats can develop into a bushy shrub to 4 metres (over 12'), but around Esperance it rarely reaches 2 metres (over 6') in height and is commonly only 1 metre, but then will be widely spreading. Here it grows into a low arching shrub, or into a tall open one with unusual shaped branches that are densely clothed in various shaped leaves.

Local forms usually have narrower leaves than those in the southwest of the State, but most have one or more relatively sharp points, although seldom skin piercing. This hakea prefers low-lying areas around swamps and along flood plains, although it will also happily grow below granite outcrops or in sandy soils overlying heavier ones, particularly where there is some seepage.

Hakea varia is another hakea species with strong honey-scented flowers, but does not seem to attract many birds, so presume the numerous flying insects that frequent it are the main pollinators. The flowering period around Esperance usually commences in June and finishes in August, but is recorded elsewhere from July to November. This variance probably relates to winter/spring temperatures, which around Esperance (being more exposed), are a little higher and rainfall a little lower, than in the more sheltered and well watered southwest of the State. However a long cold/wet winter in Esperance would likely delay flowering too.

Posted by William Archer at 9:46 PM