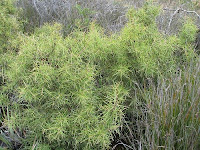 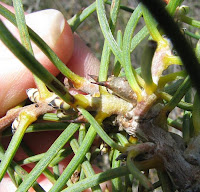 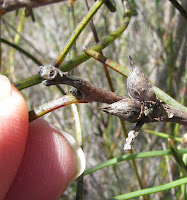 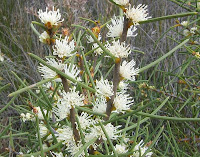 A common shrub in the southwest of WA, but of limited distribution around Esperance, although it can be locally common growing in low-lying areas like flood plains and seepage zones. The long rounded (terete) leaves are held stiffly at a wide angle to the stem and are very sharp to touch. The flowers bloom later than most other hakeas in shared habitats and are quite prolific when they do, however they do not seem to attract birds, so presume insects are the main pollinators.


The seed capsules (fruits) are tiny (6-8 mm or 1/4" in length) and although usually numerous, unless searched for are easily overlooked. They cling closely to the branches at the base of leaves and are reasonably smooth with a relatively long point (beak) at their apex. A slow growing shrub, where locally it seldom reaches a metre in height (over 3'), but apparently can reach 2 metres (6'6") in the southwest of the State. When young it is usually an open spindly plant, but can become quite bushy and develop into structurally interesting shapes.


Normally flowering around Esperance from August to October, but is recorded flowering later elsewhere.