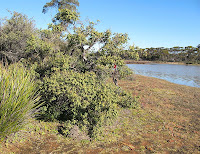 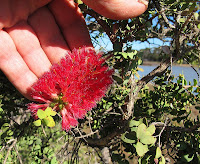 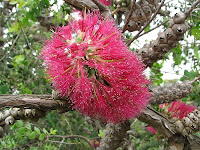 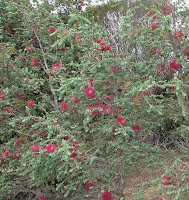 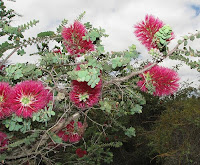 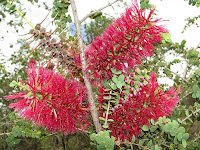 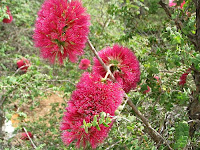 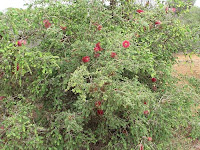 
A common shrub in the region, particularly in mallee areas where flat, low-lying, exposed granite dominate and water ponding occurs after rainfall. The Granite Bottlebrush will be found growing in slightly raised sandy clay soil overlying the rock, and sited in or near where the rainwater collects. These mallee habitats are usually in hot, low-rainfall areas, so the pondaged rainwater is far from permeant and quickly evaporates during the warmer months, making these shrubs very tough as they must often survive months of bone dry and very hot conditions, with temperatures commonly exceeding 40 degrees Centigrade (over 100 degrees F).

Despite the harsh conditions in which it often grows, it is a handsome bushy shrub or small tree to 4 metres (over 12') in height and commonly shelters small herbaceous plants beneath during the cooler winter/spring period. Melaleuca elliptica is a paperbark ie, it has a white bark that will peel in thin patches; many think all Melaleuca plants are paperbarks, but although such plants are well represented as garden specimens, paperbarks would be in the minority of this large and diverse genus.

The commonly 4 cm (11/2") diameter x 8 cm (over 3") long bottlebrush flowers, are usually a dark red and are very popular with birds and insects. The attractive compact opposite oval leaves and dense twiggy nature, restrict access to the larger birds, but make this shrub an ideal place for small birds to forage for food or to nest. Flowering is very dependant on rainfall, but can invariably be encountered between September and January, although from October to December would be the most common, provided rain has recently fallen.

The Granite Bottlebrush is quite a long lived plant and is rarely severely damaged by bushfire, being able to respout from the trunk and branches. I have observed some plants for about twenty years and despite them being temporary set back by a bushfire, they have changed very little over that time. although they might become more bushy during periods of good rainfall.