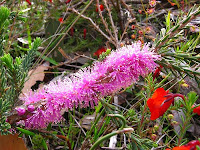 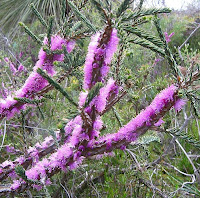 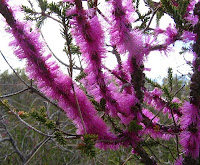 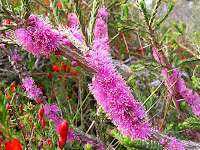 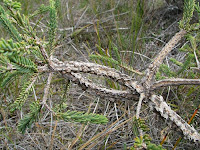 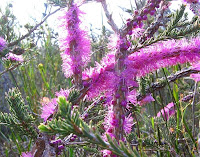 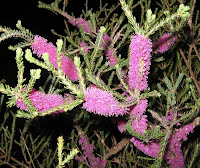 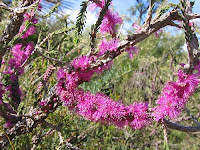 
A most unusual small shrub that flowers profusely along old leafless branches. It seldom reaches a metre (around 3') in height and is usually half that size, but spreads ungainly with several spreading twisted branches with small leaves near their tips, and when not in flower would not attract a second glance. However, when it does flower it undergoes a remarkable transformation by producing a mass of bright pinky/red flowers, which encircle the bare branches below the foliage. This presents not only a spectacular floral display, but a most unusual structure with the flowers being embedded in the corky bark along the branches.

Melaleuca suberosa is quite common in heathland along near coastal regions in low-lying areas particularly with seepage, or on flood plains and moist sandy soils over granite, limestone and clays. It regenerates quickly from the rootstock after fire (although taking two or three years to produce aged corky wood in order to set flowers), therefore some plants although of small statue can be quite old and would probably make an interesting bonsai specimen.

The plant is popular and probably pollinated by insects, and being close to the ground includes many non-flying species. Flowering is recorded from August to December, but around Esperance it often flowers a little earlier from July to November, with August and September being the main period.