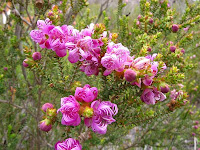 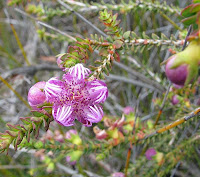 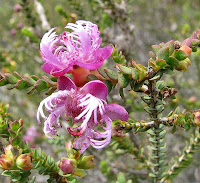 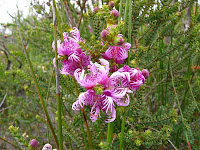 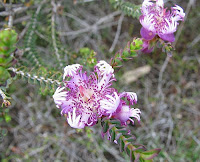 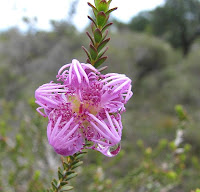 
The base of some of the stamens of this plant's flowers are combined into a long stem, on which the projecting remnant stamens replicate a hand with fingers, and the anthers the nails. The inward curve of the hand produces a sinister looking claw. Melaleuca pulchella is a very common and often dominant shrub to 3 metres (10') in height (but more often closer to one metre), growing in low-lying swampy areas, which are subjected to winter flooding. It occurs in near coastal heath and shrubby wet hollows of inland mallee areas, as it regenerates from the rootstock after bushfires, it can quickly reclaim its habitat to remain the dominant species.

The Claw Flower is commonly grown as a garden specimen, probably due to its unusual flowers, small neat opposite foliage and the hardiness of the shrub to various environments. The flowers are mainly visited by flying insects and will sometimes conceal a flower spider to pounce onto these visitors. Flowers can often be found on shrubs at most times of the year, particularly after good rainfall, but the main period tends to be around November/December.

Posted by William Archer at 7:49 PM