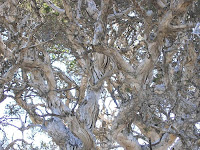 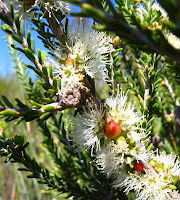 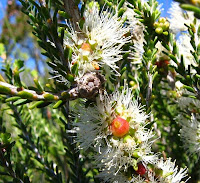 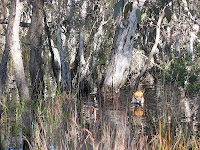 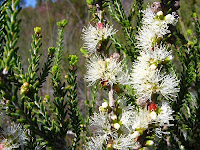 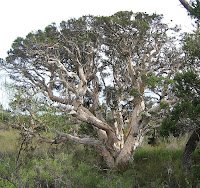 
A very common and variable shrub/tree in the region and although called a Saltwater Paperback, it also grows in freshwater. Melaleuca cuticularis can be found in estuaries, lining fresh and salty creeks, in saltlakes, swamps and flood plains. It occurs from the coast to wet hollows and saltlakes in the mallee, over 100 km inland. Naturally, with such habitat diversity there are many forms, varying from small rounded shrubs to tall majestic trees of over 7 metres (24') in height.

The flowers are white and generally bloom from September to December, with October and November being the main period. However, it is not the flowers that are the attraction of this plant, but the thick white flaky bark and the rugged gnarled and twisted tree growth, which could probably make a spectacular bonsai.

A wide range of large water birds and raptors find the tangled upper branches ideal for nesting, but there are some risks like the local Tiger Snake that will easily climb the tallest in search of eggs and young nestlings.

The bark can be pulled off in large sheets and would have been used by pre-European aborigines as a clean surface for food, a food/water container, temporary shelter, etc. The plant produces a hard heavy durable timber and probably was used for weapons and tools. The toughness of Saltwater Paperbark timber also made it popular for fencing by early European settlers, as it would withstand attack from termites and fungi, but having the drawback of crooked trunks and branches.