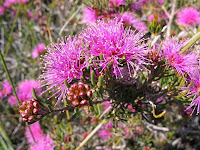 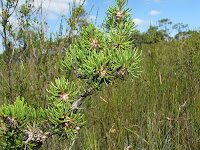 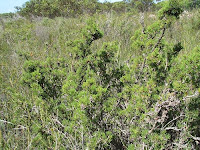 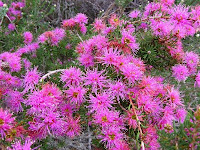 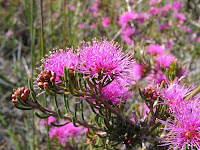 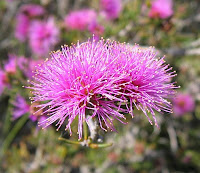 Common around Esperance, particularly in heathland to the east and near northern mallee areas within 100 km of the coast. It favours low-lying areas with a clay base that flood during winter, however it is seldom the most dominant shrub of these habitats, but is still usually well represented.

The Rough Honey Myrtle is an untidy open shrub to 2 metres (over 6') in height (but usually smaller), which has several low-dividing and spreading branches with short bushy laterals of uneven length. The commonly rounded and channelled leaves are a little over 1 cm (3/8") in length and generally curve upward. Their surface have numerous rough tubercles from which the shrub gets its name.

When in flower, Melaleuca scabra can be quite eye-catching with a bright pink to deep red splash of color, but the blossoms tend to be short-lived and the display finishing within a couple of weeks (frequently due to rainfall), however scattered flower clusters can occur for some time. Depending on soaking rainfall, particularly inland, this species can flower anytime from July to January, but the main period would be from August to October.