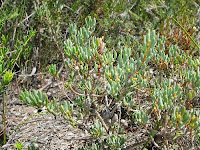 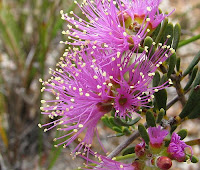 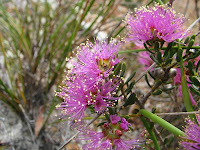 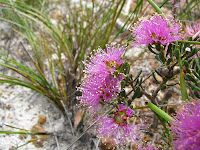 A very pretty small shrub of less than 50 cm (1'6") in height, and one you would never know was there unless in flower. There are three varieties of Melaleuca tuberculata (all with similar flowers), one to the north of Albany, so well outside the Esperance district, but two are within. The one shown here (var. macrophylla) and going on distribution records the most common and only found in deep white (acid pH) sand (typically a soil of heathland dominated by Banksia speciosa). It is the smaller shrub, but has the larger leaves that reach a little over 1 cm (3/8") in length x 2 mm (3/32") wide (my collection), although they are officially noted as being between 1.2 to 3.5 mm in width. The leaves of Melaleuca tuberculata var. tuberculata (the other variety in the district), are smaller being 7 mm long x less than 1 mm wide (my collection), plus are curved and more congested. Another difference is var. tuberculata grows in heavier soils and to twice the height of var. macrophylla.

All varieties of Melaleuca tuberculata are so called because of the small tubers on the leaves, which are more easily seen in dried specimens, which along with other factors are a distinctive feature of this species.

Melaleuca tuberculata var. macrophylla has most attractive flowers of a Fuchsia Pink color with bright golden/yellow anthers. It is recorded as flowering between July to November, although in the deep sandy soil of near coastal regions, it produces good displays during November and December. This variance may be due to most records being from warmer/drier inland regions where flowering is usually earlier. The woody seed capsules of the specimens I have seen and considering the shrub size, are comparatively large and occur singularly or in small groupings.