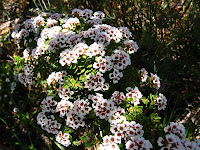 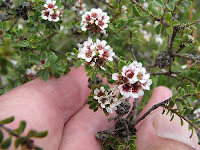 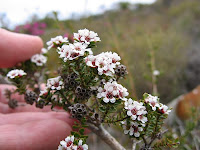 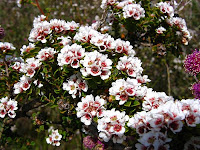 Taxandria was previously known as Agonis and contain plants that have flowers like Tea Tree (Leptospermum), but seed capsules like Paperbark (Melaleuca). The flowers are grouped into numerous tight spheres and the resulting fused woody seed capsules develop into globular football looking clusters, which usually remain on these shrubs like Melaleuca species. Tea Tree flowers by comparison, occur individually and mostly fall annually.

Taxandria spathulata is one of the smaller shrubs from this genus, growing to 2 metres (about 6') in height, but more commonly less than 1 metre. It grows in a wide variety of soil types and is often the dominant shrub of flat low-lying sandy areas that retain moisture for extended periods, but it can also be found (although not dominant) in dry elevated habitats of deep sandy soil amongst heath species. Regenerating from seed after fire, it is quite fast growing and quickly spreads to about 2 metres (around 6') diameter, with untidy long leggy stems supporting scattered foliage and flowers, and unless cut back will die-off within a few years.

Some forms of this species, or those that have been cut-back, can be quite showy and longer lived with more closely arranged flowering heads and compact small spoon-shaped leaves. The white flowers are insect attracting and the local flowering period is from September to November.