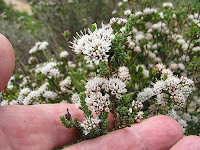 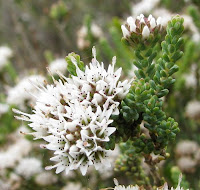 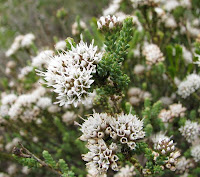 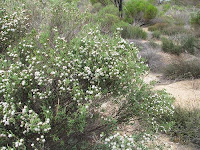 The Darwinia genus is remarkably florally diverse and is represented by a considerable range of shape, color and size. Species in this region are not as spectacular as some found in the Stirling Range (to the west of Esperance), however the local ones do have their own charm, combining neat compact foliage with mass flower displays, and only lack the surrounding large colorful bracts that are often mistaken for the actual flower.


Darwinia diosmoides is a hardy species to around 1 metre (little over 3') in height and found in many habitats from coastal heathland to inland mallee regions, particularly to the east and north of Esperance. It is more commonly encountered in low-lying areas, often in heavier soils around salt-lakes and drainage zones, but flattish areas at the base of granite outcrops is also favoured.

The leaves are small, neatly arranged, fleshy and soft to touch, whereas the flowers with the long projecting bottlebrush tipped styles, are grouped into heads and somewhat typical of many Darwinia species. Individual flowers will last for several weeks and the plant as a whole will continue to bloom providing rainfall is reasonable. Rarely are flowers not found on this plant, but the most reliable period for a good display is from October to January.

Posted by William Archer at 5:19 PM