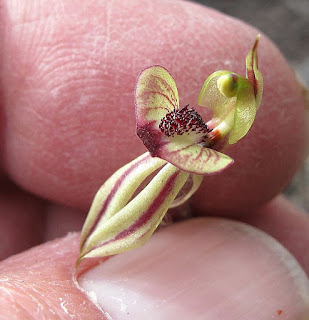 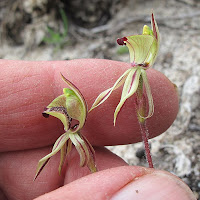 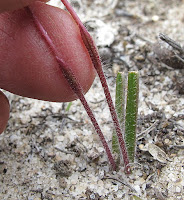 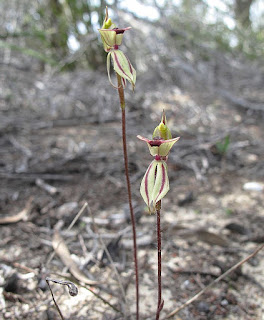 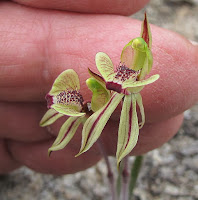 To date this species has only been recorded in a broad band of mallee country from around Balladonia to Salmon Gums and then onto the Lake King district, where numbering from a few individuals, to spreading open colonies where collectively common.

Personally, I have not encountered this orchid near saltlakes (recorded habitat), although they have been in the general vicinity, but in deep (acid) sandy soils with mallee heath/woodland, it is also found around granite outcrops, where it can grow to 20 cm (8”) in height. It is noted being in flower from August to October, but with adequate rainfall and mild conditions will continue well into November.

In habitat it is easily confused with the more common Short-sepaled Spider Orchid, Caladenia brevisura, but the labellum of C. voigtii has a taller and more dense row of red-tipped calli, plus lacks the clubbed sepals of C. brevisura. It tends to flower later too.

Caladenia roei overlaps C. voigtii in the western portion of its distribution, but that species has spreading petals and sepals in a crucifix shape, plus shorter deep purple calli on its labellum.

Caladenia voigtii is named after Don Voigt, an Esperance orchid enthusiast who discovered this species near Salmon Gums (north of Esperance) in 1977.