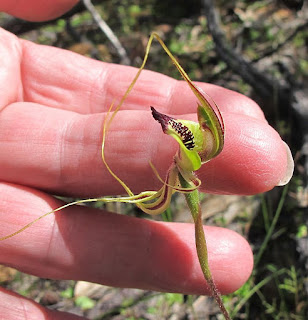 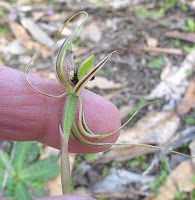 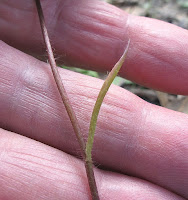 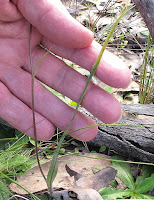 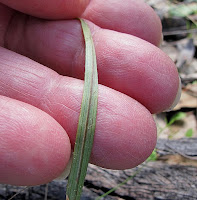 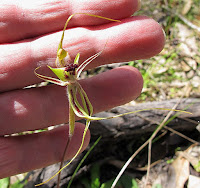 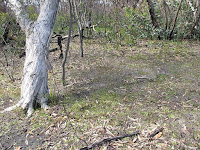 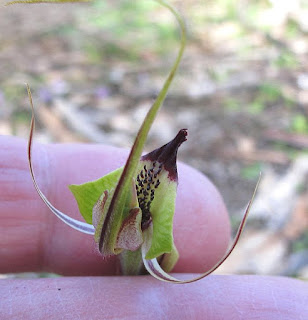 
A coastal to near coastal orchid of restricted distribution between the Mt Merivale/Cape Le Grand region (east of Esperance), and Israelite Bay, preferring moist acid sandy loams around granite outcrops or Yate Swamps (Euc. occidentalis), where in the latter it grows on the slightly raised and better drained areas. Flowering is normally from September to early November.

Although this orchid can reach almost ½ metre in height, its wispy nature and habitat blending colouration makes it difficult to see, as the eye is usually looking for smaller plants closer to the ground. As a result, I tend to spot this orchid from a short distance, rather than when standing nearby.

From my observations, the flowering of Caladenia exstans is quite erratic, occurring one year then going several years without. It seems to be more common after bushfires or at least when influenced by the smoke.

Apart from C. integra from the Albany/Perth region, C. exstans is the only other WA green spider orchid to have a smooth edged labellum, plus only occurring in a restricted zone east of Esperance, it is unlikely to be confused with another species. The common name of Pointing Spider Orchid, refers to the tip of the labellum, which remains extended (pointing), unlike most spider orchids that have a furled tip.