Building on the geographic locations of Mts. Ney, Heywood and Newmont as shown in Part 1, Clyde Hill and Mt. Buraminya, the main subjects of this post, run parallel to them, but around 20 km (12 miles) further east, with Clyde Hill being almost on the same latitude as Mt. Heywood. Mt. Buraminya is 20 km (also at 45 degrees) NE of Clyde Hill and about 35 km south of Mt Newmont. Within this grouping there are other large granite outcrops, but they are either less significant (landscape wise) or due to regrowth and fallen trees, the result of bushfires, are now too difficult to reach.


Clyde Hill is around 110 km (70 miles) NE from Esperance and due to easier vehicle access, has been botanised for some time. It was the first place Prostanthera carrickiana (see photos below) was discovered, but this plant has now also been found further out, at the less accessible sites of Mt. Buraminya and Mt. Newmont. This hill has granite shoulders and small hilly outcrops to provide interesting habitat diversity. It is also host to the most southern colony of Calothamnus tuberosus, which is common on many more northerly granite sites. 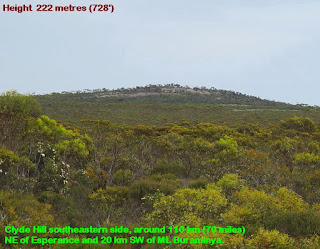 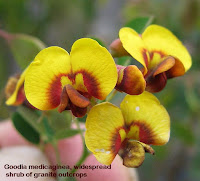 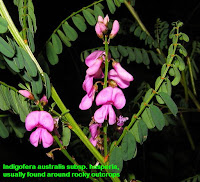 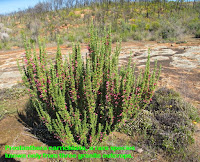 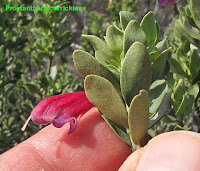 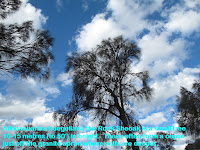 Mt. Buraminya is a little over 20 km NE of Clyde Hill and has even more habitat diversity, it supports a range of flora more commonly found further north at places like Mt Newmont, whereas Clyde Hill has more species associated with granite outcrops further south. From a distance Mt Buraminya is more like a gently sloping hill and consequently is less of a distinctive landscape feature, but up close there are areas of loose boulders and rivulets of vegetation, which are interspersed with exposed granite. Plus it has a wide apron providing additional habitat generated from rainwater run-off. 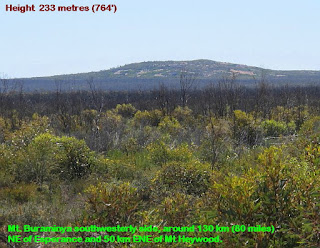 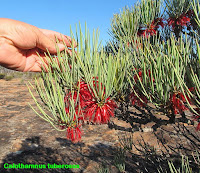 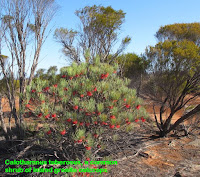 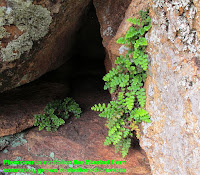 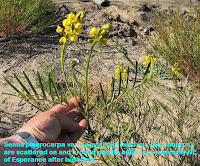 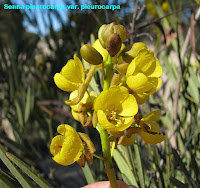 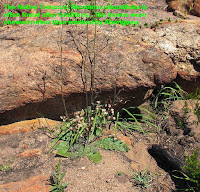 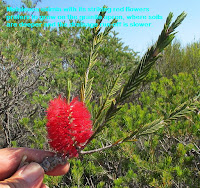 Mt Ragged is highly distinctive and is readily recognisable even if not seen before. All early seafaring explorers and navigators to the southwest of Australia made note of it, as it can be clearly seen far out to sea. It is enhanced by the Nullarbor, a flat region to the east that runs for hundreds of km/miles, so any dramatic height variation draws spirited attention.

A little to the north of Mt. Ragged is the Russell Range a group of large rocky outcrops, which also dominate the landscape. Despite their prominence, there is no easy access to them and when I was exploring that part of the mallee, there were no tracks of any type. I walked in on two occasions (before digital photography, so no blog photos), the first trip was before a bushfire event, when access to the rocky regions was virtually impossible due to the boulder-strewn terrain and dense vegetation. On the second occasion and shortly after a bushfire, it was easier to access, but was still far from easy due to the awkward size of rocks and boulders that blocked the way. Of particular interest was a rare plant Kennedia beckxiana, the Cape Arid Kennedia that was quite common and rambled thickly over other vegetation, rocks and boulders.

Another interesting feature of the Russell Range was the very hard Quartzite (quartzarenite) rock found there, which originally was a sedimentary white quartz sand, but where the fine grains had been cemented together by silica, making it very solid and without fracture zones. Being such a tough, fracture resistant rock, it was used by Aborigines as a hammer stone to knap sharp flakes from chert (flint like material), which were then used for various cutting and scraping tools. This region appears to be the only place where this material is available in an otherwise granite dominated region and was probably traded far and wide. 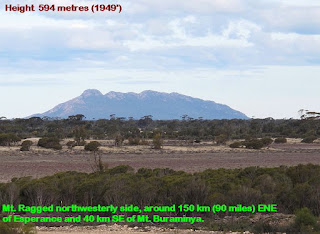 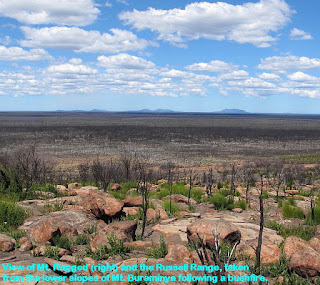 These Mountain posts are archived under “Habitat”
Posted by William Archer at 7:20 PM