The heights of many of these mallee mountains are not very impressive compared to those of other parts of the world, including Australia. However a mountain is more than just height, it is also defined in the Oxford English Dictionary as "a natural elevation of the earth surface rising more or less abruptly from the surrounding level and attaining an altitude, which relatively to the adjacent elevation, is impressive or notable." This description aptly fits the situation around Esperance.

These mountains and large rocky outcrops are distinctive markers in an apparent featureless landscape and naturally play an important part not only in their flora make-up, but also by providing perspective and resources for the original Aboriginal inhabitants, as well as later European visitors. The mallee close up, I should add, has many redeeming features like saltlakes, low-rocky outcrops, sandy hills and a host of soil types, which are largely responsible for its often unique and impressive biodiversity.

Most of the large outcrops are to the north and northeast of Esperance, this is at least partly due to the inland topography being much higher in the west. In fact the elevation of the gentle undulating land south of Lake Tay (large dry saltlake, around 150 km or 90 miles, NW of Esperance), is 300 metres above sea-level and similar in height to Mt. Ridley, Mt. Ney, Mt. Heywood, Mt. Newmont, Clyde Hill and Mt. Buraminya. Whilst the land elevation around these outcrops is considerably lower at only 150 - 200 metres above sea-level.

Additional information is recorded on the photographs.  To read click the image to enlarge.


Mt. Ney is one of the nearest large inland, rocky outcrops to Esperance being around 75 km away to the NE at roughly a 45 degree angle. It is quite ornamental with a double peak and also has interesting rock formations and pools, although the latter will dry out over summer. Mt Heywood can be clearly seen 10 km away at the same angle and they commonly have several Wedge-tailed Eagles gliding from one to the other, where they take advantage of updrafts to gain additional height. 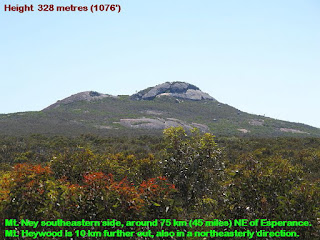 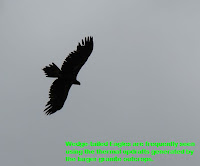 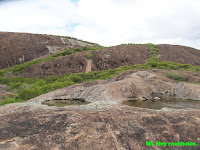 Mt. Heywood is 10 km NE of Mt Ney, but covers a larger area and would probably have greater plant diversity due to its more varied habitats. On its flattened summit are some large straight sided rockpools of over 30 cm (12”) deep, but like all others they too dry during the hot summer months. There is also a long seepage zone down one side where a huge section of granite has separated from the main block, which now permits the accumulation of freshwater that slowly seeps down this vegetated junction to provide a small, but important watering hole at its base. 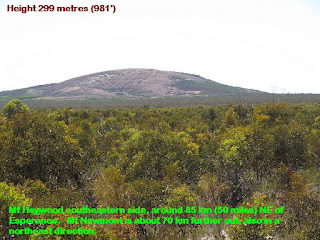 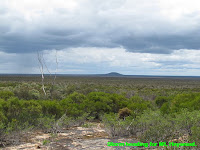 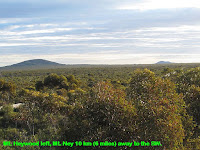 Mt. Newmont is 75 km further out than Mt. Heywood and being so remote has few visitors. Like Mt. Heywood, it too covers a large area with many habitat types. There are several rare plant species, some named, others not, making it an exciting place to explore. Remnants of pre-European Aboriginal activity indicates this outcrop was an important place, with probably a Gnamma hole water supply (deep holes in the granite, with a small opening that could be covered by a rock or branches to protect the water from animals and evaporation). These days the holes are difficult to find, as they silt up without Aboriginal maintenance. 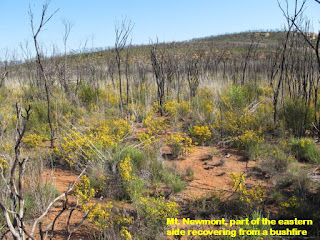 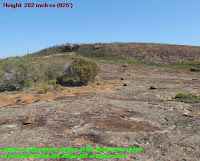 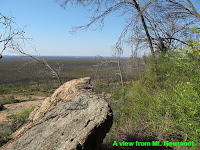 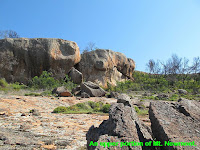 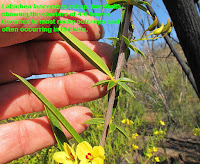 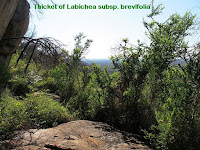 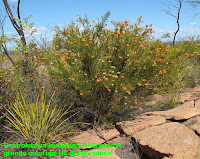 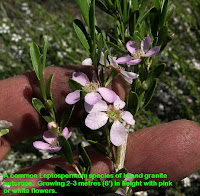 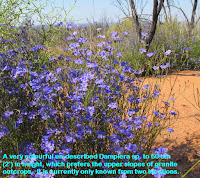 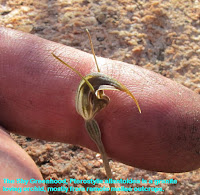 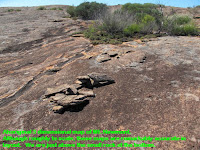 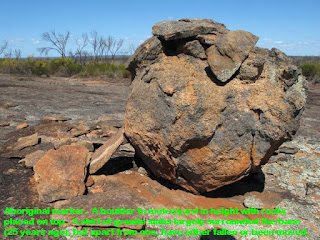 A word of caution:
Access to the above granite outcrops requires a 4WD vehicle, which will very likely acquire a few scratches along the way. Under no circumstance should a visit be attempted after wet weather, as the likelihood of becoming bogged is high. The access tracks to Mts. Ney and Heywood are rough, heavily overgrown and very narrow, which are themselves difficult to locate. The entire rocky outcrop of Mt Newmont is difficult to find due to track confusion, plus sections can become impassable when wet.  There are no services of any kind out there.
Posted by William Archer at 6:43 PM