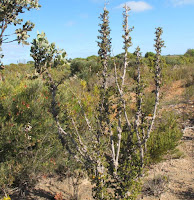 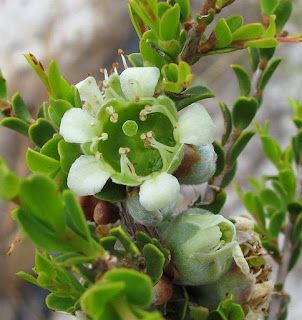 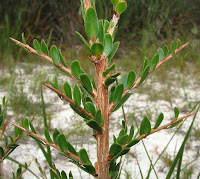 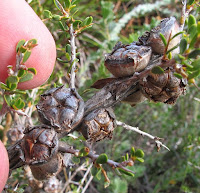 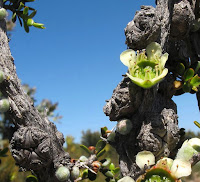 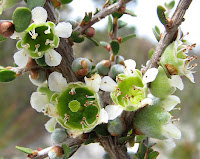 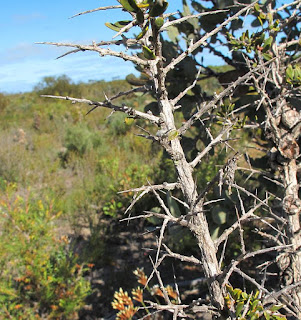 
This is a very odd looking plant and even appears out of place in its natural environment. It seldom exceeds a metre or so (4’) in height and usually consists of one to several comparatively thick and well spaced vertical trunks, from which short stiff shoots branch, each ending in a sharp point. It is so different from other vegetation that even when not in flower it readily stands out.

The solitary flowers are also strange, being quite large (around 2 cm or ¾” in diameter), but most of that is made up by the central green ovary portion, with the five relatively small white petals spaced around the outer perimeter. Again the flowers are noticeably different from others in the bush and despite their lack of colour, still attract strong attention. Once the flower is pollinated (probably by flying insects), it develops into a correspondingly large woody fruit and although most Leptospermum species release their seed annually, this one only does so after the plant has died (usually after a bushfire).

Leptospermum spinescens is a common and widespread shrub that rarely if ever occurs in large numbers, but usually as individuals or in small groups. It grows in deep non-calcareous sand, or shallowly over gravel and sited on hilltops to relatively low-lying areas; mallee and coastal heath are preferred, with the noticeable absence from the wetter and more heavily forested region of the southwest. The distribution of this plant is similar to that of the wheatbelt, spreading from Geraldton to Israelite Bay, and above a line between Perth and Albany placing it in a 30-80 cm (12”- 32”) annual rainfall zone.

Flowering is from September to December, depending on location and local weather conditions.

Leptospermum is part of the large and highly diverse Myrtaceae family.