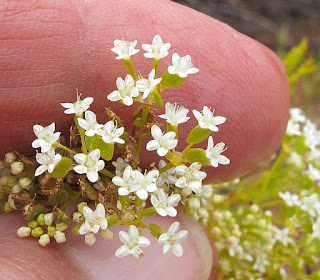 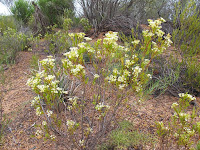 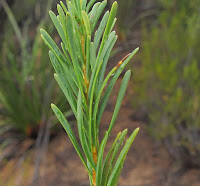 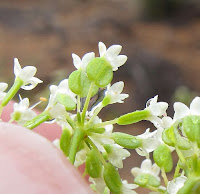 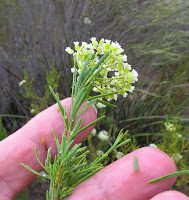 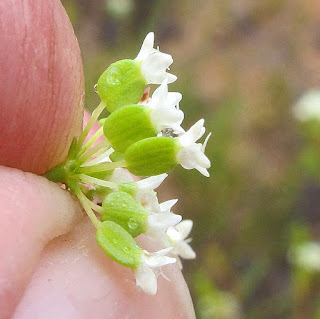 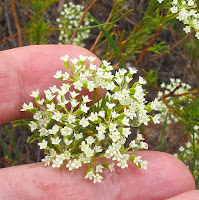 
Platysace maxwellii was a popular Aboriginal food prior to European settlement and was known as Karno or Kukine. The plant, a sub-shrub of around a metre (3’) in height, produces a number of edible tubers, which have the common name of Native Potato (also applicable to other species of Platysace). The tubers were highly regarded by Aborigines, as they are apparently (when eaten raw) sweet, juicy and thirst quenching or could be roasted in the ashes of a fire.

Several Platysace species have edible tubers or swollen roots and are a reliable food source, being available all year around. Collection was the job of the women, who would use a wooden digging-stick to dig up to ½ metre (20”) underground, but the shallower tubers were their preferred choice. Apart from the near coastal Ravensthorpe district, Platysace maxwellii is mainly an inland species, forming a rough triangular distribution from Ravensthorpe to the Hyden district, then NW to the Geraldton region, with an outlier population to the North of Mt Heywood (NE of Esperance).

Platysace belong to the Apiaceae family, also known by some as Umbelliferae, the latter being largely usurped by the former. There are a number of genera in this grouping that include such notables as celery, carrot and parsley, so these are an important food group for non-Aborigines too. The common feature with these plants is the floral umbels containing a number of flowers, with each flower producing a fruit that splits to release its seed. Platysace produce a laterally compressed fruit comprising two joined carpels, of which each generally contain a single seed.

The flowers do have microscopic differences between species, but it is mainly the fruits and foliage that differ most. Platysace maxwellii is different by having a protruding midrib that separates the two carpels and long firm narrow foliage from 1.5 to 2.5 cm (5/8”- 1”) in length. Leaves that are less than 1.5 cm in length would indicate another species.

Platysace maxwellii colonies tend to be scattered in a variety of non-calcareous soils, but once encountered are invariably in substantial quantities. It is usually the umbels of many small white/cream flowers that first catch the eye and these can occur anytime from October to April, depending on location and climate conditions. When not in flower the plants would probably go unnoticed unless you where looking for them.

Platysace belong to the Apiaceae family, but depending on the classification system being used may also be listed under Umbelliferae.