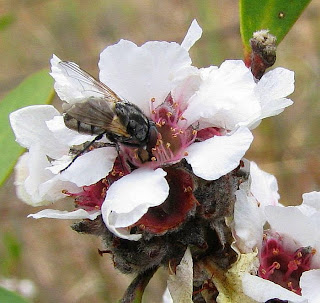 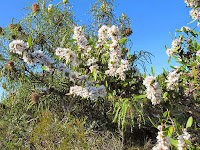 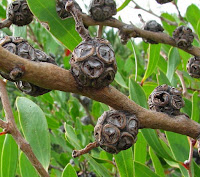 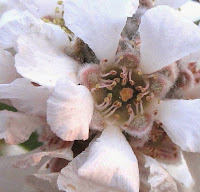 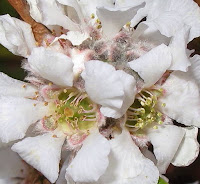 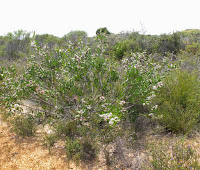 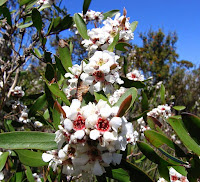 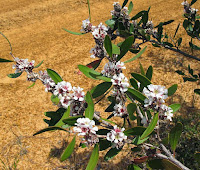 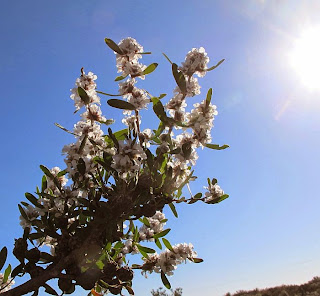 Agonis baxteri
This species has the largest flower of this genus and make impressively large globular floral clusters. The tea-tree like flowers are emphasised by their green, pink or red centres, while the spaced oval, thick green leaves (to 70 x 20 mm or 3”x ¾”), provide a pleasant green backdrop without crowding them out. These are followed by unusual soccer-ball shaped seed capsules.
Agonis once made up a sizeable genus with numerous species, but after a revision in 2007 it was split into three genera, with most species being moved to Taxandria and one to Paragonis, leaving only four Agonis species. Taxandria differs from Agonis by having only 10 stamens, as against Agonis having 15-35. Paragonis form only 1-3 flowers that are not joined together and hence produce singular fruits, whereas both Agonis and Taxandria produce globular heads of flowers and hence a multi-celled wooden capsule. Agonis baxteri I should add was called Agonis obtusissima before the revision.
Agonis baxteri is usually a 2-3 metre (around 8’) high spindly shrub, but can be less so and more spreading when in an exposed location and/or after young shoots have been damaged, thereby encouraging additional side branching. Locally it prefers a Heath environment in deep non-calcareous sandy soils, but is also found in shallow sands overlying granite, limestone or gravel; these may be sited on hilltops or in low-lying areas providing drainage is reasonable. Generally, Agonis baxteri commonly grows within 100 km (60 miles) of the coast, but can extend into Mallee heathland; it occurs from Albany to east of Esperance at Israelite Bay.
Individual flowers can be 20 mm (3/4”) diameter, but are made more impressive by their large chunky clusters, which are around twice that size. The eye-catching flowers will bloom for extended periods, which can be from September to December.
Agonis is part of the very large and hugely diverse Myrtaceae family.
Reference:
A revision of the Western Australian genus Agonis (Myrtaceae) and two new segregate genera Taxandria and Paragonis.
By JR Wheeler and NG Marchant.
Nuytsia Vol 16. No 2. 2007.
Posted by William Archer at 1:33 PM