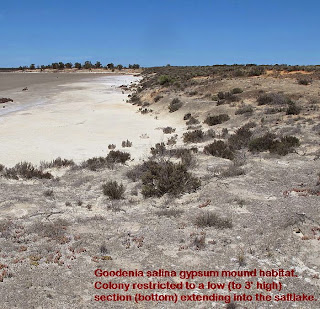 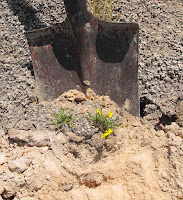 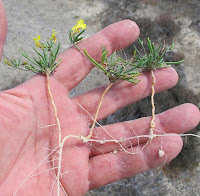 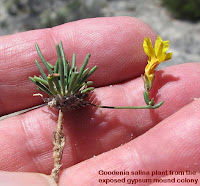 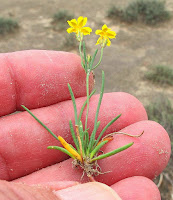 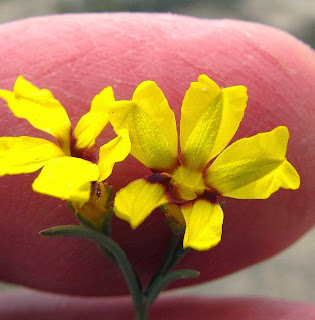 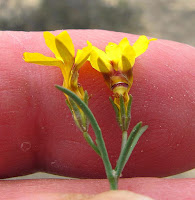 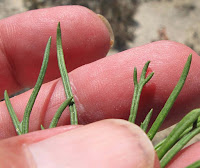 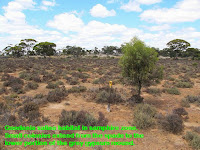 Goodenia salina
This small unassuming plant has a Priority Two Conservation Code rating, meaning it is known from less than five populations and is in urgent need of further study. It was only described in 2007 from material collected from two locations, one in the Lake King region and another in mallee NE of Albany, but now other colonies have been discovered further east. In my region, I have encountered it in the Lake Tay and Lake Sharpe areas where reasonably common in small-scattered colonies; these lakes are over 100 km (62 miles) from the closest Lake King colony and around 110 km NW of Esperance.
Despite being a small delicate looking plant, it grows in a most harsh environment, namely Samphire beds and gypsum mounds on dry inland saltlakes. These occur in low rainfall regions (around 30 cm or 12” annual rainfall) where gypsum forms into fine powdery deposits; these are not only periodically incredibly dry, but are usually saline too. These habitat conditions are too harsh for most plants and require the herbaceous Goodenia salina to adopt adaptive survival strategies; firstly it is a perennial (apparently annual in the Lake King area) and has a protective, relatively deep rhizome from which other plants develop into self-supporting individuals.
The soft herbaceous foliage dies back to the rootstock when conditions become too hot, but quickly regrow when moisture becomes available, especially after summer storms. The recorded flowering period is September and October, but from my observations, it also blooms from November to the end of January, which illustrates Goodenia salina is highly opportunistic and blooms whenever conditions are suitable in its irregular rainfall habitat.
Other variations from the more western colonies concern the divided foliage, which is more pronounced by having deeper and more numerous pinnatifid divisions. The leaves in Lake Tay and Lake Sharpe region have mostly entire linear foliage, although these might vary at different times of the year and in different weather conditions.
My thanks to the WA Herbarium for confirming identification.
Goodenia is part of the Goodeniaceae (Fan-flower) family.
Reference:
Five new conservation-listed species of Goodenia (Goodeniaceae) from southern Western Australia
By LW Sage and KA Shepherd
Nuytsia Vol 17. 2007.