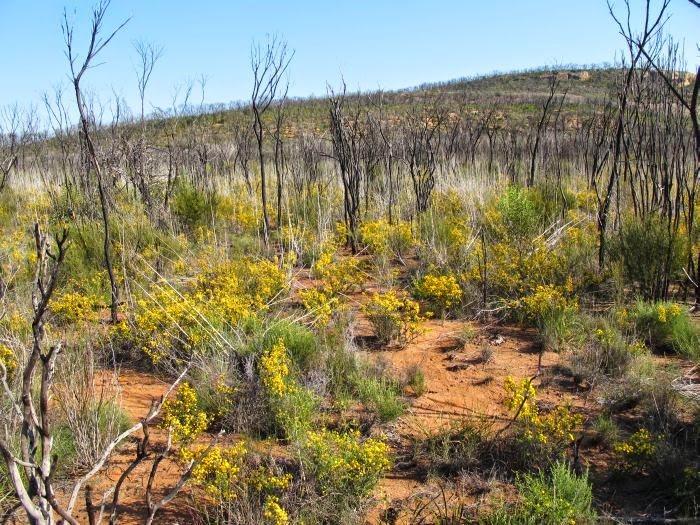 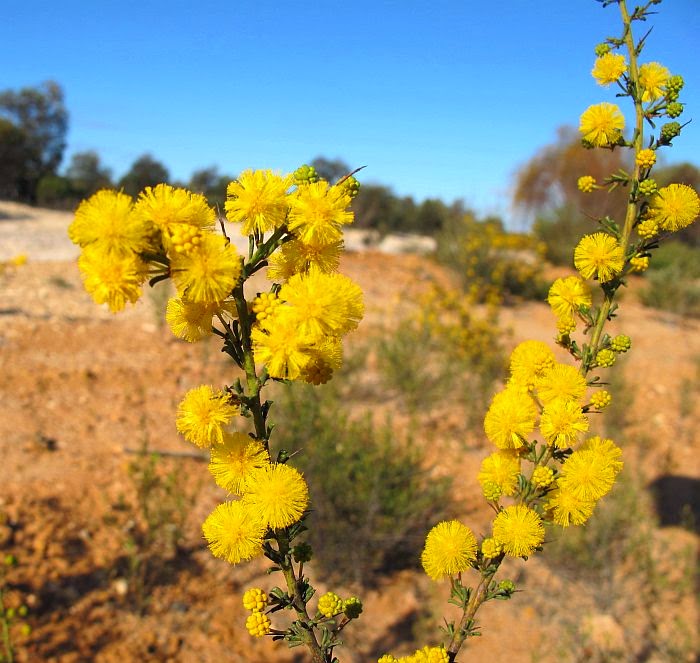 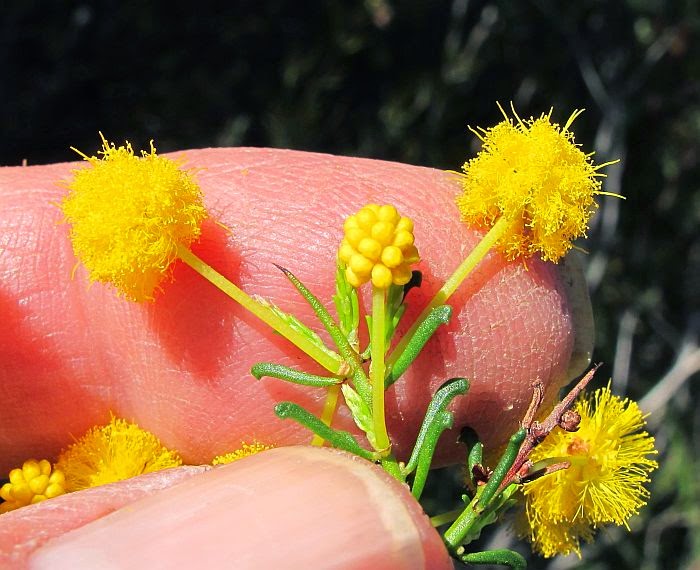 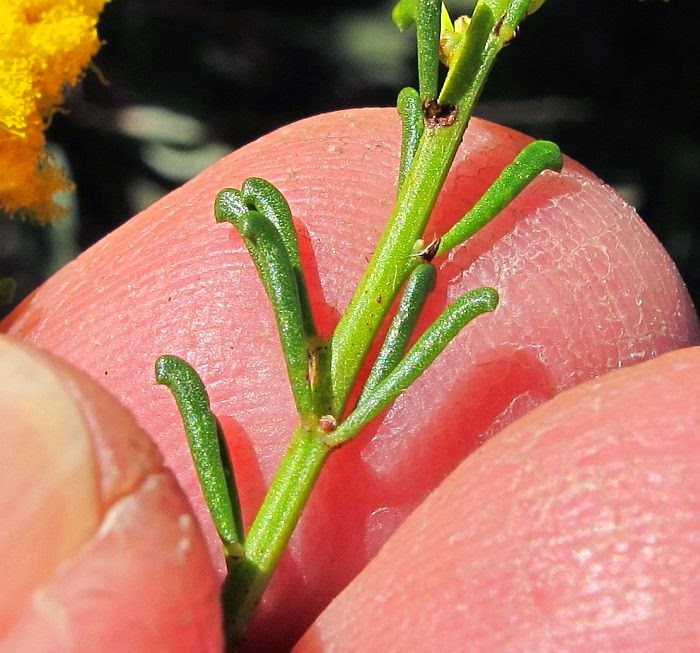 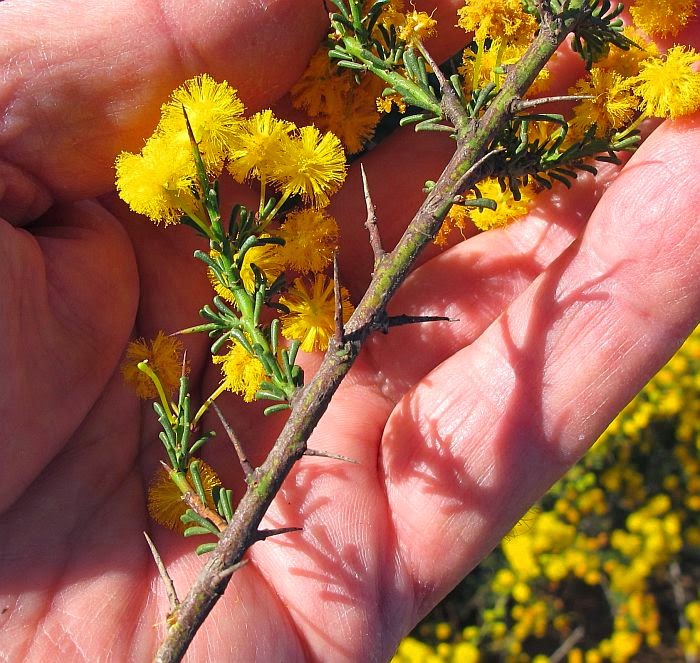 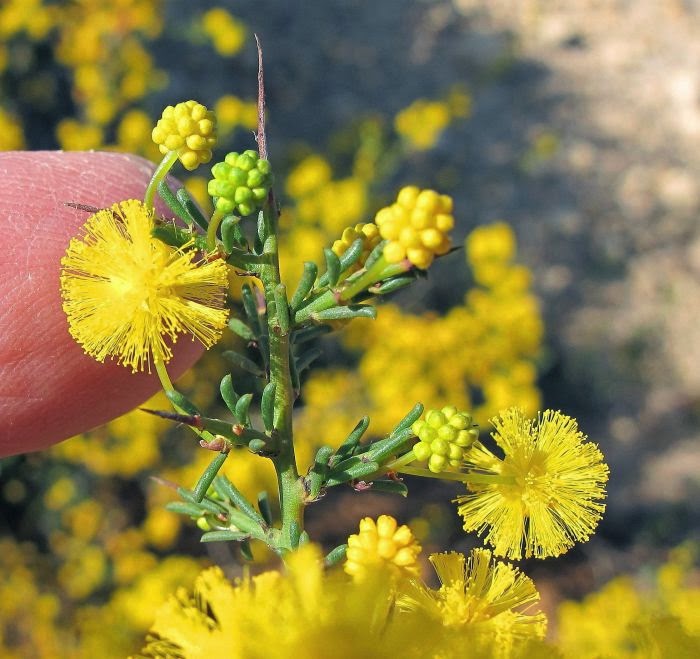 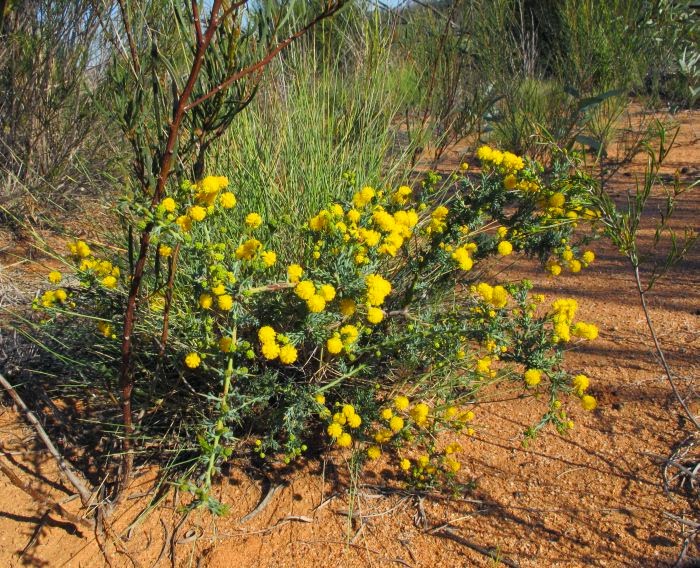 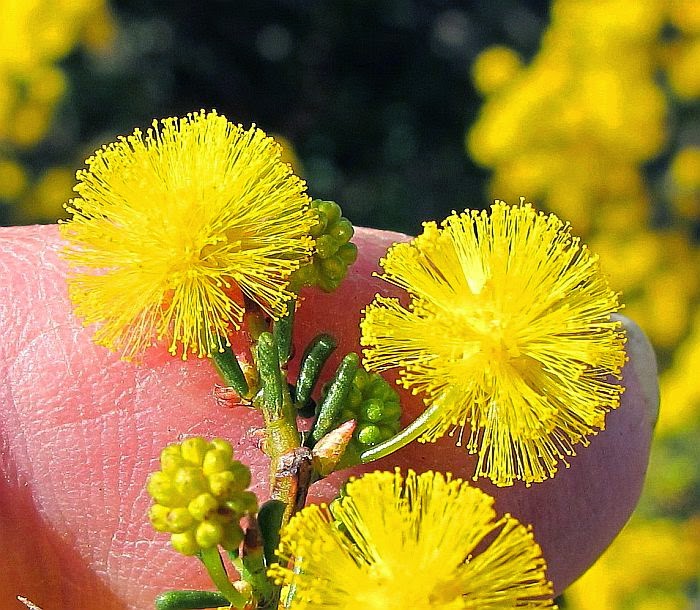 
Acacia acanthoclada is named after its spiky tipped branches (A acantha: thorn + clad: branch), of which it is very fitting. On the habitat photo above, this plant extended 300-400 metres/yards to the rock getting denser as one progressed, so much so that I had to carry the dog in places, whilst I battled on in my shorts with scratched and bleeding legs.

Most Acacias love bushfires and can germinate in vast numbers in their ashes, as was the case above, but fortunately the aptly named Harrow Wattle was only around ½ metre/yard in height at the time I was there. However if I visited a year or two later, they would be 1-2 metres (5’) in height and be impossible to pass through.

This well armed species prefers the semi-arid inland, which in its WA distribution, extends from around 50 km (30 miles) from the coast, to near Wiluna, approximately 870 km (540 miles) NNW of Esperance. It also occurs across the Eyre Peninsula in SA and to the intersecting boarders of SA, NSW and Victoria.

Despite the prickly nature of Acacia acanthoclada, it has attractive golden yellow flowers and is very colourful in the bush, although most gardeners have great distain for these plants, but their dislike is very misplaced. The advantage of prickly Acacia shrubs is they provide a fast growing impenetrable hedge, plus a marvellous place for little birds (under their protection) to hunt for grubs and to nest.

Acacia acanthoclada is recorded flowering from July to December; it has two subspecies, of which the above is the most widespread, the other subsp. glaucescens is restricted to WA from near Morawa to NW of Koolyanobbing. It has much broader phyllodes that are a bluish/grey colour, so they are easily separated, which is also assisted by their distribution that has minimal overlap.

Acacia is part of the large and highly diverse Fabaceae (Legume) family, but depending on the classification system in use, may also be listed under Mimosaceae or Leguminosae.

PS, I suspect in pre-European times these vast thickets of Acacia species were rarely created, as small animal populations (especially mammals) were then in far greater numbers, but now have been decimated by the predation of feral cats and foxes.

Small animals like native Rodents, Bandicoots, Rat-kangaroos, Potoroos, Bettongs, Hair-wallabies, Rock-wallabies and others, many going extinct since European settlement, whilst survivors exist only on off-shore islands, or remain as small remnant colonies. Many of these animals would commonly feed on the Acacia seed and/or consume the seedlings, but now there is no such controlling influence over Acacia populations.

However, the irony is these dense prickly Acacia thickets can now play an important role in protecting any small indigenous animal survivor, by providing a safe retreat from the relentless onslaught of introduced predators.
Posted by William Archer at 4:23 PM