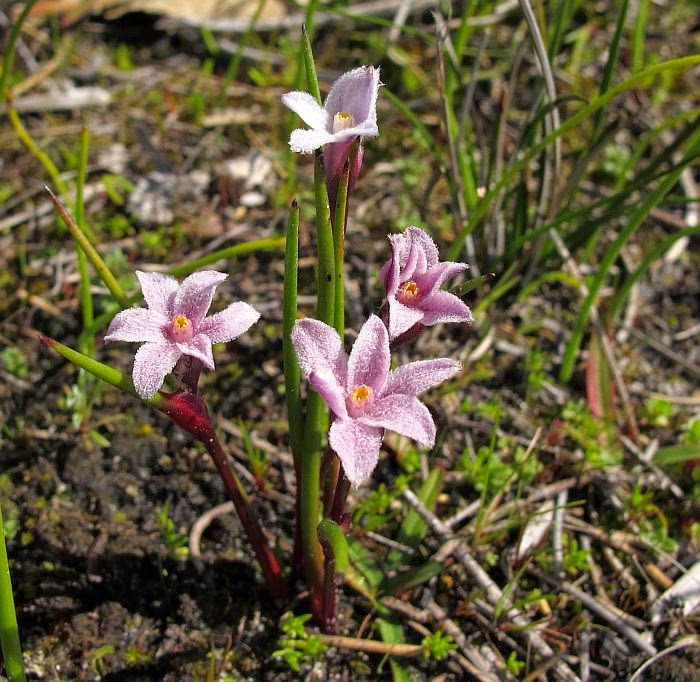 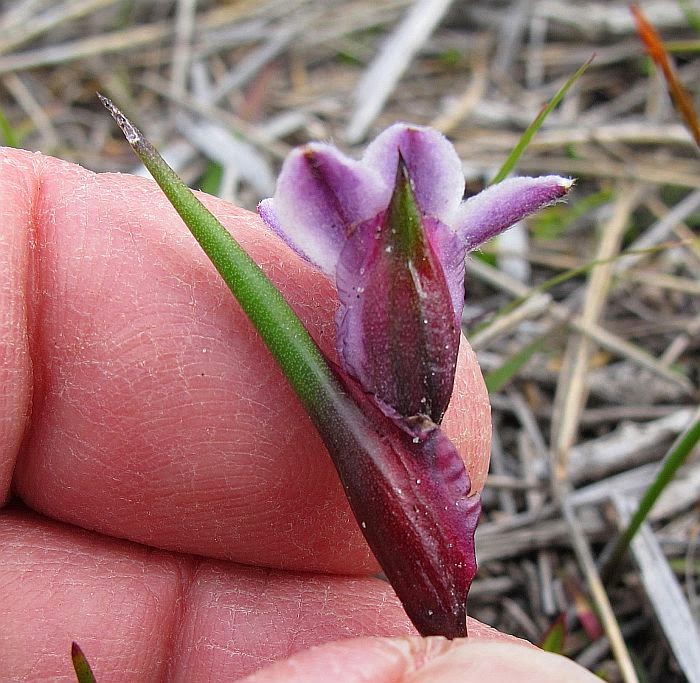 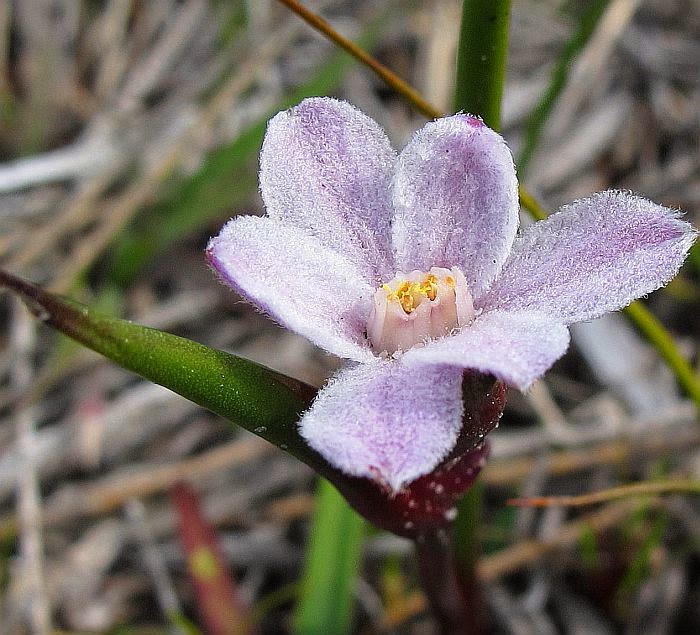 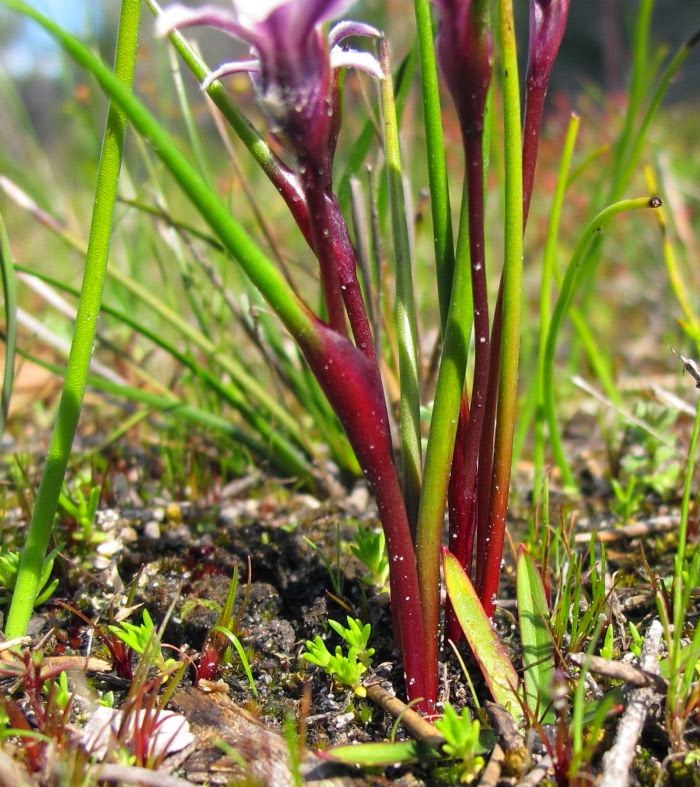 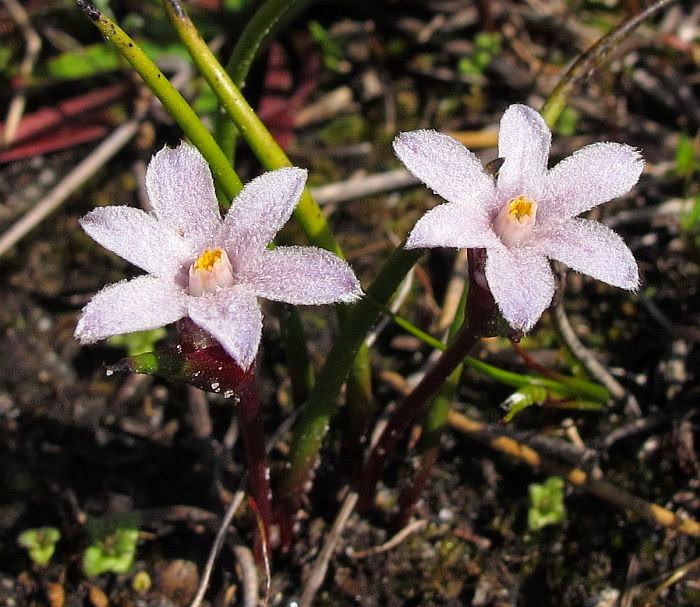 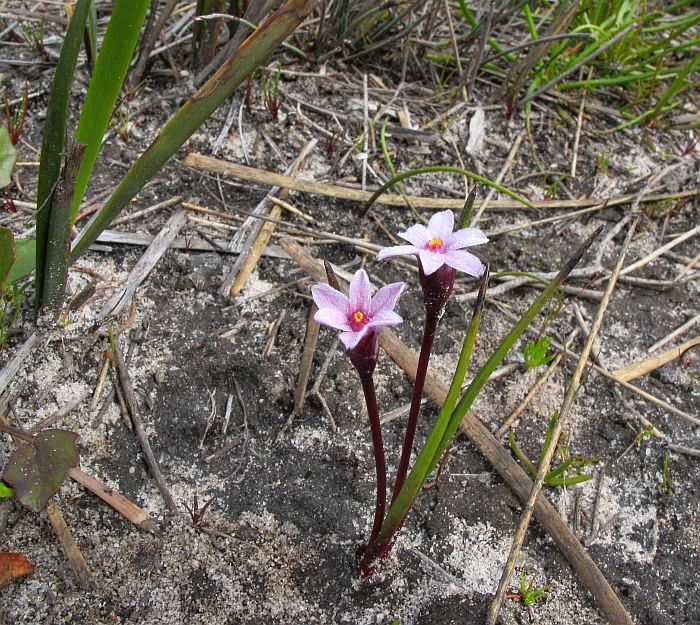 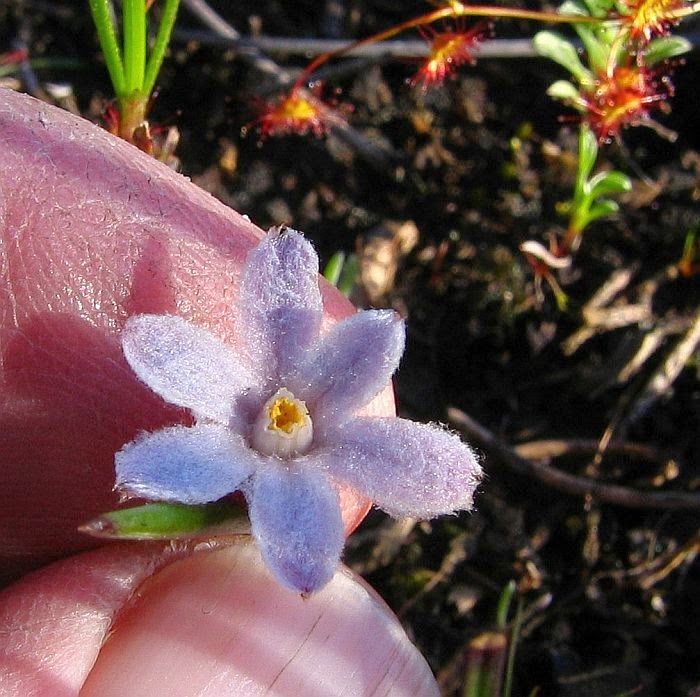 
This perennial herb stands to 15 cm (6”) in height and has thick woolly petals that can be white, pink or pale purple and which due to their fabric-like appearance you might think represent the cloak. However the cloak refers to the broad filaments that clothe or partially hide the anther and collectively (as can be seen in some photographs) form a ring around them.

Locally Tribonanthes violacea is mainly found on non-calcareous flood plains, which comprise a sandy peat soil over clay, on which floodwater slowly seeps during winter/spring. I have also encountered them growing through the moss at the base of granite outcrops. They grow from a tuber, to which they retreat upon the onset of hot weather or when the soil begins to dry.

Providing the habitat is not overgrown, scattered plants will appear each year, but after bushfires they will be considerably more numerous. There are seven known species and all endemic to the southern portion of WA, but there is only one in the Esperance region, which is the most widespread and occurs in near coastal habitats from just north of Geraldton to Cape Arid (east of Esperance). Most other species are found in the SW corner and up the West Coast to north of Perth, sometimes spreading further inland when conditions are suitable.

Tribonanthes violacea with its greater distribution overlaps most other species, but may be distinguished by their usually solitary (to 1.5 cm or 5/8” diameter) flowers and 2 large broad bracts that partially cover the flower. However the length of the cloak (filament appendage) is also a guide, being a little shorter or the same length as the anthers, whereas with other species are either longer or generally much shorter. Another species Tribonanthes longipetala also has single flowers, but they are superficially daisy-like with very narrow and much longer petals.

This species has a delicate beauty, but you need to get close to examine the densely hairy petals that are infused with the softest of colour tones. Flowering is recorded from July to October depending on local weather conditions.

Tribonanthes is part of the Haemodoraceae (Bloodroot) family, which besides the spicy Bloodroot, also includes Kangaroo Paws and other prized ornamental species.