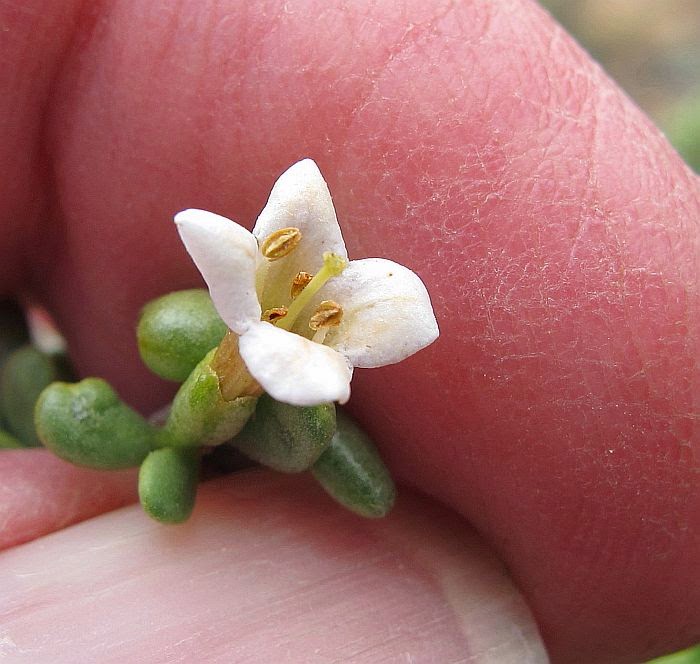 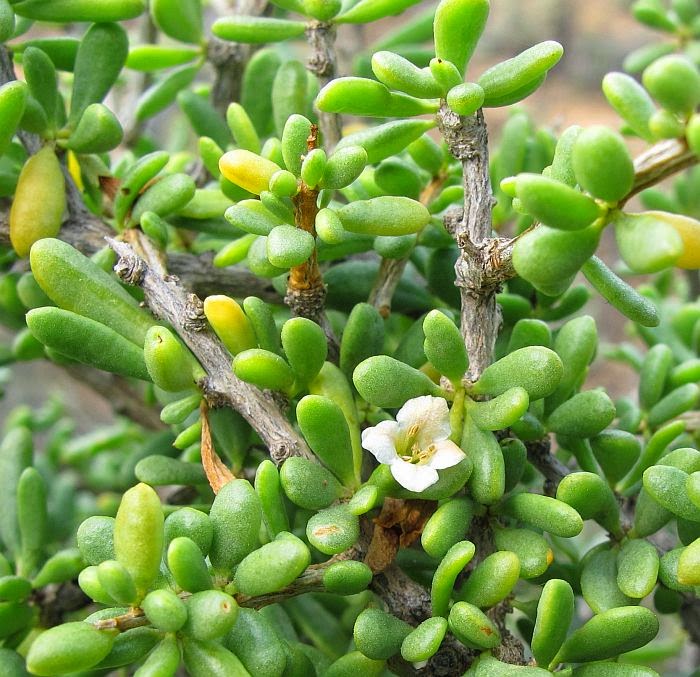 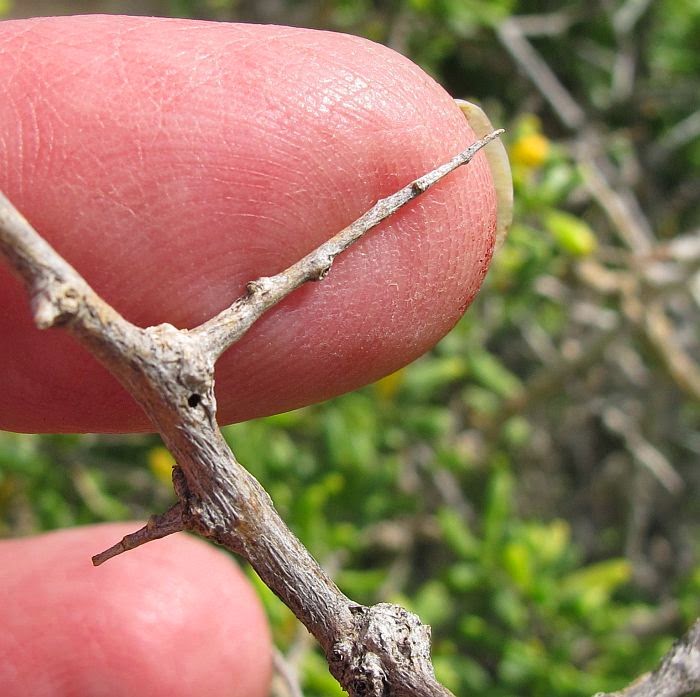 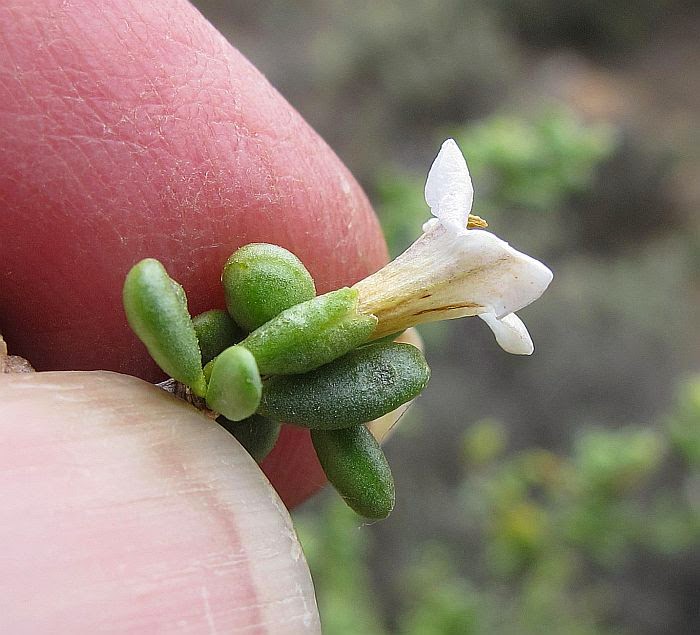 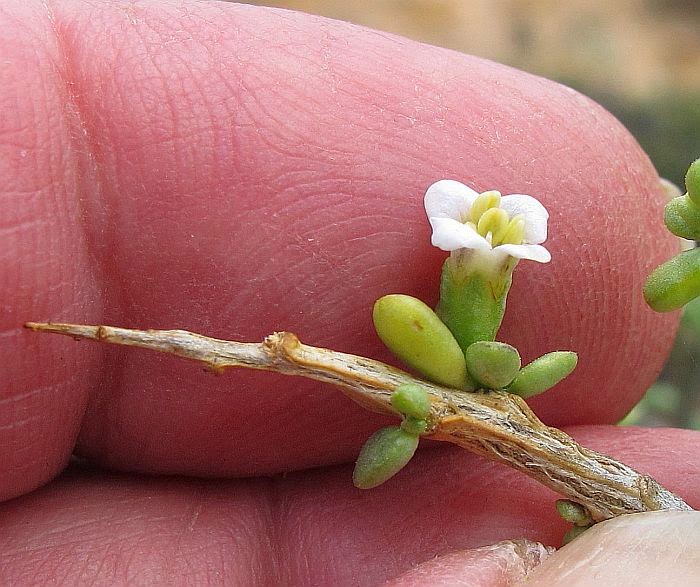 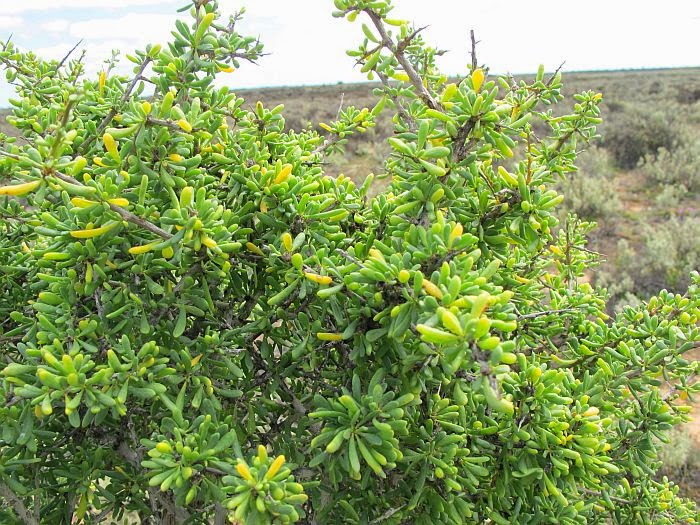 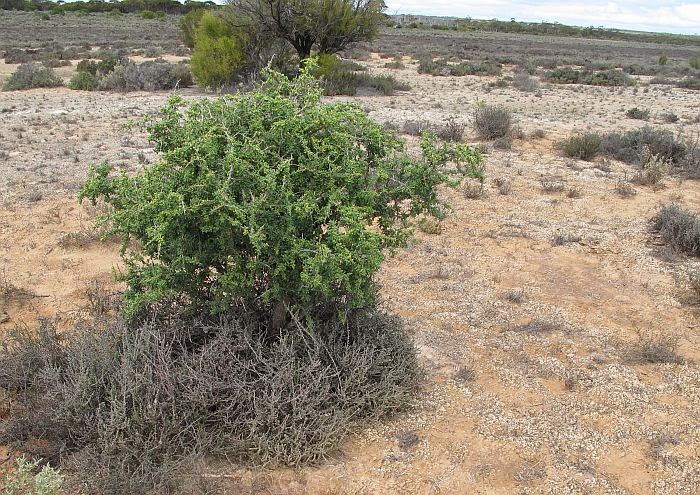 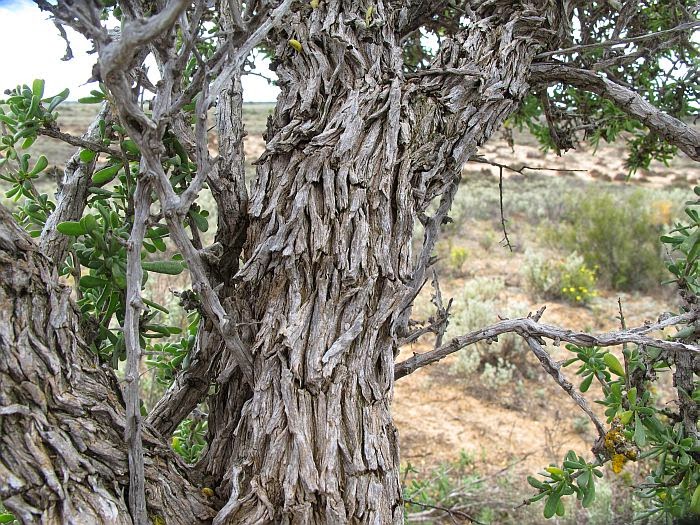 
Many people in Australia and NZ are familiar with the introduced African Boxthorn, which is a declared noxious weed in both countries, however in the drier regions of the southern half of Australia we have an indigenous one, which I am quick to assure is not a weed. It favours the fine sand and clay rises around saltlakes, which usually also have a high gypsum content and may also be slightly saline.

In the Esperance region it is not overly common, but may be found on gypsum/clay mounds in open colonies on and around some of the larger inland mallee saltlakes. It grows slowly to a little over 2 metres (8’) in height, although in its open windswept environment it is usually shorter and due to the harsh conditions, there is a lack of other vegetation so they are seldom burnt in bushfires, thereby probably reaching a considerable age.

The Australian Boxthorn, like its South African counterpart (Lycium ferocissimum) also produce berries for birds to eat and distribute the seed, but its fruits are much smaller (less than half the size), nor as brightly coloured (only a dull yellow in the local species). However despite that disadvantage, individual seeds of Lycium australe are larger, which greatly assist the fast development of young seedlings. This would be an important advantage in the low rainfall, open windswept environment, where soils dry rapidly; so much so that many plants only germinate in the shelter of small hardy shrubs and the greater moisture retention of their leaf-litter.

Another advantage of the Australian Boxthorn is its moisture holding fleshy foliage, a strong adaptation to combat the difficult conditions that restrict the colonisation of faster growing species, which would otherwise push this slower growing plant out. However although these adaptations enable Lycium australe to successfully survive in this hot dry environment, it would conversely be disadvantaged in a more sheltered enclosed habitat with other vegetation, where bushfires and plant competition would fatally restrict its long-term survival.

The African Boxthorn on the other-hand does not suffer the same disadvantages, as it not only produces more seed, is faster growing, but highly compatible in less harsh non-arid habitats, including coastal regions, where it can out-compete other species by quickly developing into a large spiky shrub. Thus relatively slight species adaptations permit Lycium australe to exploit an ecological niche to become a contributing member of the Australian ecosystem, whilst a similar related but introduced species cannot and becomes a noxious weed.

The flowers are produced only when conditions are most compatable, so may be encountered anytime from February to October (the remaining period being the hottest part of the year and possibly not suitable for the small fragile flowers, or their pollinators). Apart from WA, Lycium australe is also found in SA, Western NSW and NW Victoria.

Posted by William Archer at 4:57 PM