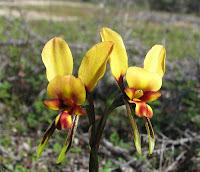 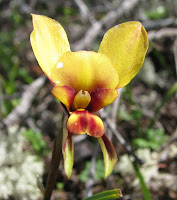 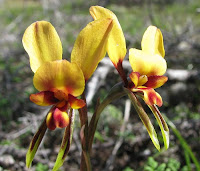 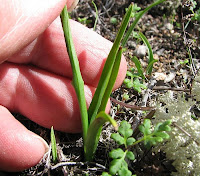 
A small colony of these Donkey Orchids were found growing in shallow-ish soil on Breeboorinia Rock, 150 km NE of Esperance. It is very similar to Diuris pulchella, except it has reddish/brown markings on the labellum wings instead of mauve, which is apparently a diagnostic feature. Also there are only two Diuris species recorded for this area, these being D. laxiflora, the Bee Orchid (which this orchid does not resemble) and D. pulchella, the Beautiful Donkey Orchid (which it does, except for colouration).


The width of the leaves (5-10 mm or to 3/8" wide) are notable with this species, as is its short stature; the above stood around 150 mm (6") in height and was flowering during the latter part of September. Although as I have said before about ephemeral plants growing in these regions of low irregular rainfall, flowering time is very dependant on the timing of seasonal precipitation, ie if late or little rain, it will result in later flowering, or no flowering at all.


Distribution is recorded in a band from Paynes Find to Salmon Gums, with the above colony around 150 km (90 miles) further east.  Flowering is noted from August to September.


Reference:
Field Guide to the Orchids of Western Australia
by A Brown, K Dixon, C French and G Brockman.
Posted by William Archer at 3:47 PM