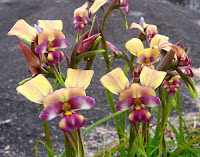 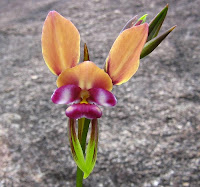 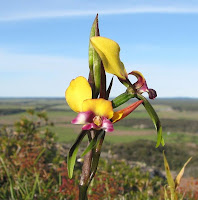 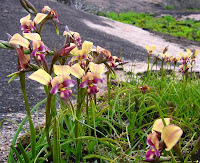 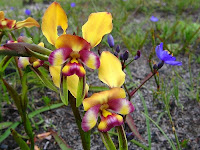 
This very spectacular orchid has been popularly known by various names, from Diuris pulchella, Diuris sp. affinity corymbosa and Diuris sp. 'Esperance Coast' the latter as detailed in the publication 'Orchids of Western Australia' by Andrew Brown et.al. However, Diuris pulchella in the later publication 'Field Guide to the Orchids of WA' now also includes a coastal distribution on granite outcrops to the east of Esperance, whereas before it was only recognised for inland populations.

This beautiful orchid commonly grows on and around granite outcrops to the east of Esperance then along the coast to Cape Arid. Once seen it is not easily forgotten with large (to 3.5 cm or 11/2") brightly colored flowers and growing to half a metre (over 1' 6") in height. It does not need the assistance of a bushfire to flower, but is probably assisted by the reduction of other potentially smothering vegetation. Flowering period is from July to September.


Reference:
Field Guide to the Orchids of Western Australia
by A Brown, K Dixon, C French and G Brockman.
Posted by William Archer at 4:18 PM