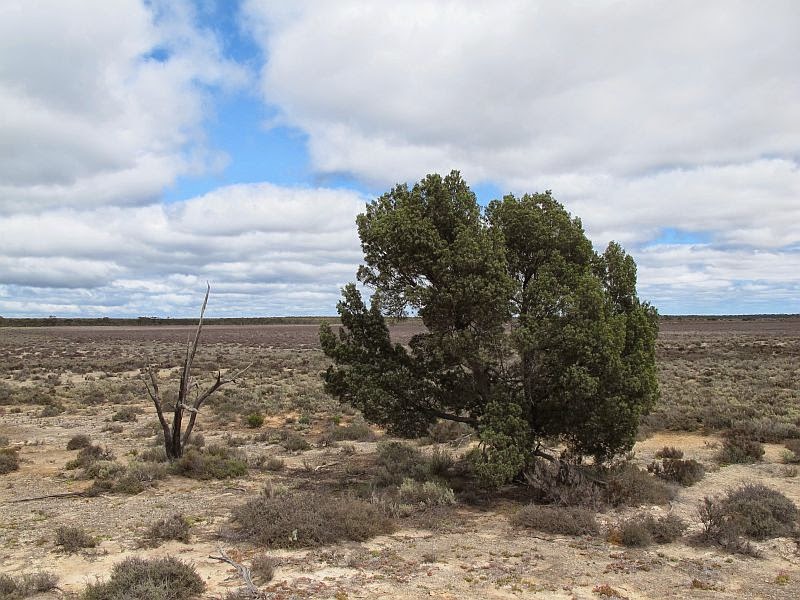 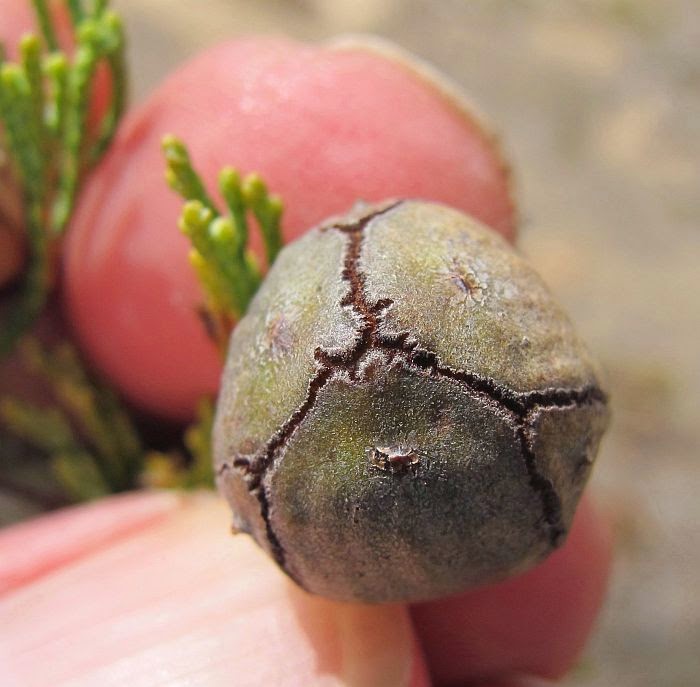 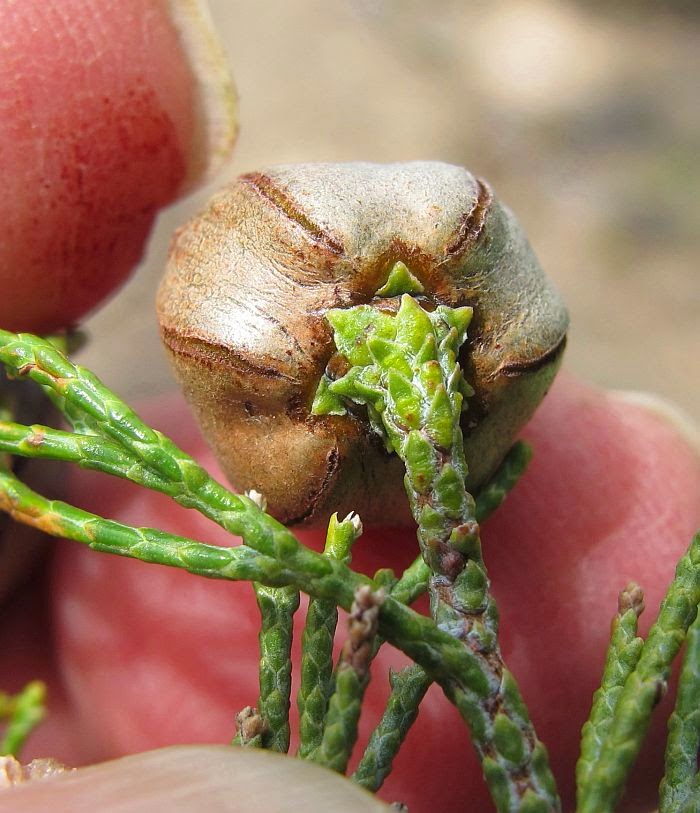 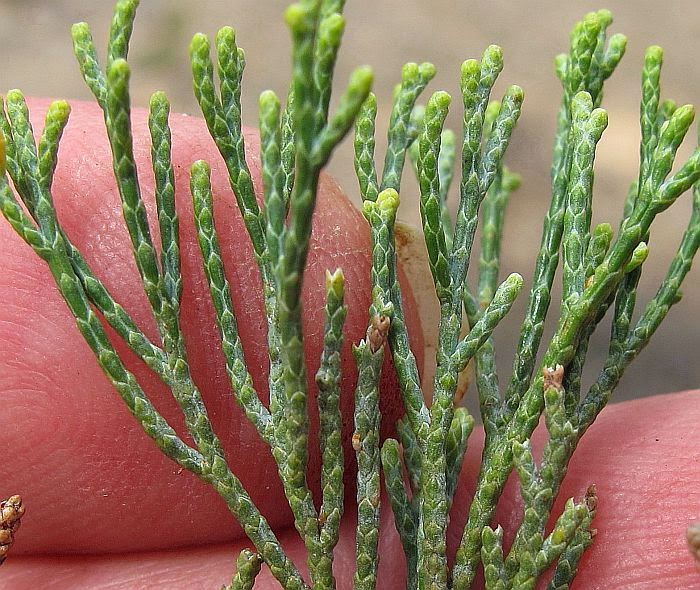 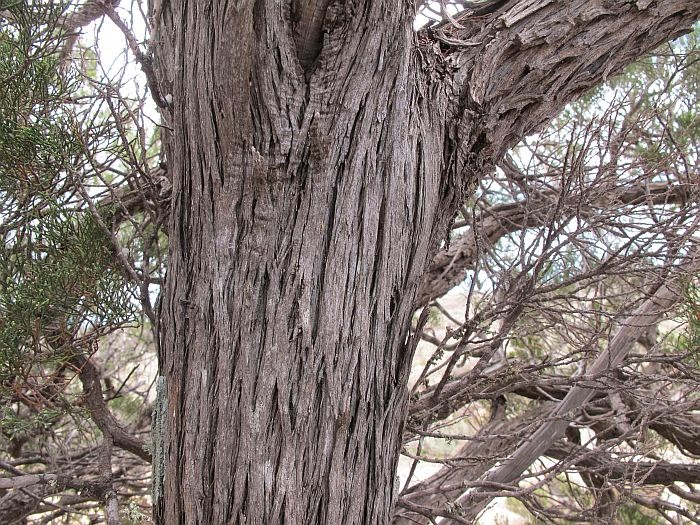 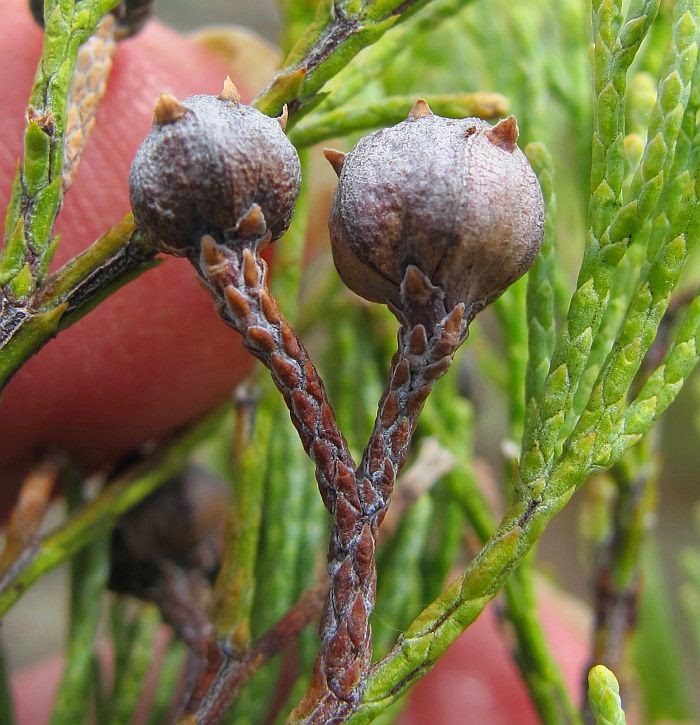 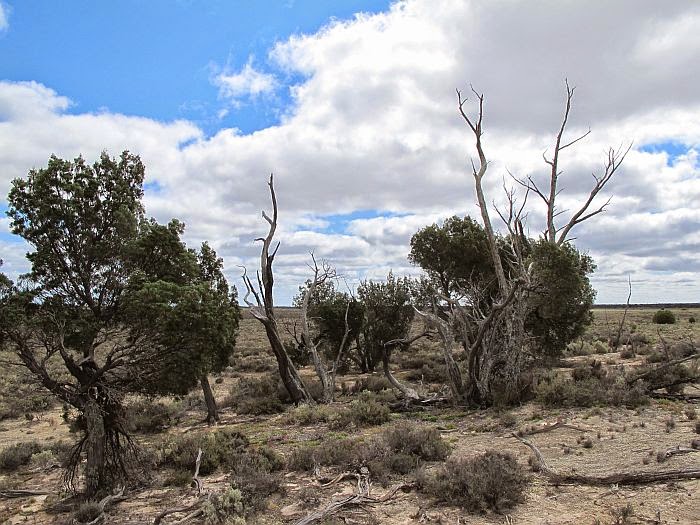 
This conifer is not a common tree of the Esperance region, with the above seen growing on and around a 2 metre high gypsum mound on Lake Sharpe that is to the west of Peak Charles and 130 km (80 miles) NW of Esperance. Here there is only handful of plants in various stages of development and have obviously survived in this remote habitat for a considerable period of time, as the surrounding low open saltbush and samphire vegetation has been insufficient to carry flames from the outer wooded areas during bushfires.

Callitris canescens grows to around 6 metres (20’) and forms either a small tree with a single trunk or a tall shrub with multiple trunks. It is certainly a very tough plant growing in a totally exposed, hot, arid, windblown environment in dry alkaline gypsum soils. Rainfall here is generally less than 250 mm (10”) a year and temperatures in the shade are commonly over 40 degrees C (over 104 degrees F) during summer.

The Scrubby Cypress Pine can be easily confused with Callitris roei that is a more common conifer in the area. Visually the most distinguishing feature is the foliage; C. canescens has shorter leaves on the ultimate branchlets of between 2-4 mm (mostly around 2-3 mm or 1/8”) in length, and importantly the dorsal surface is rounded. Callitris roei on the other-hand has leaves almost twice that length and commonly 4-5 mm or ¼” in length; the dorsal leaf surface however, is strongly keeled as if a boat had been turned upside down.

Both C. canescens and C. roei have female cones with dorsal protuberance near the apex, but those of Callitris canescens are very small, lightly structured and easily damaged. C. roei are far more robust, the cones are also slightly larger (around 2 cm or ¾” diameter) and from the many I have seen, have a distinct silvery grey appearance.

The White Cypress Pine, Callitris columellaris has even smaller leaves than Callitris canescens and also with rounded dorsal surfaces, but the cones are much larger (commonly to 2.5 cm or 1” diameter) and often have a less even surface with slight bumps, ridges and hollows that become more pronounced as they dry.

Callitris canescens is endemic to Australia and is mainly found in WA (mostly inland) from Kellerberrin to the Kalgoorlie region and south to Ravensthorpe, plus on the Yorke and Eyre Peninsulas including southeastern parts of SA.

Callitris is part of the Cupressaceae (Cypress family).

Posted by William Archer at 4:04 PM