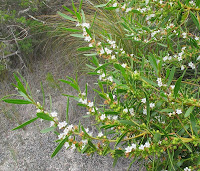 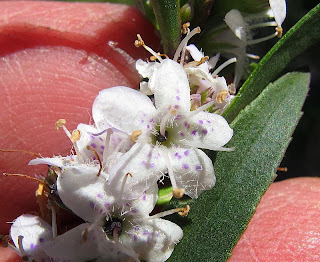 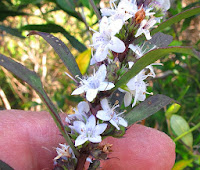 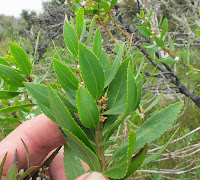 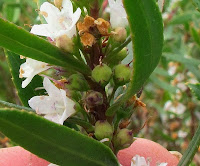 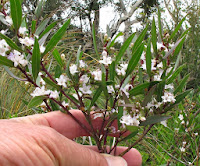 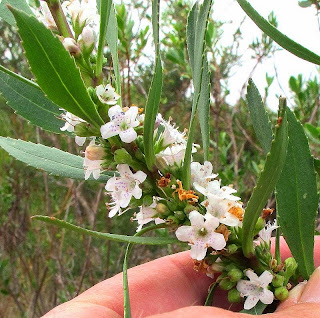 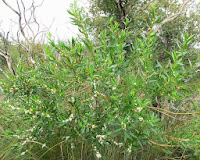 
The Myoporum genus is not restricted to Australia with various species widespread in the Pacific Islands (including NZ), and various Asian countries encompassing some Japanese territories and even China. However most of the 30 odd species are found only in Australia. Myoporum tetrandrum is endemic to WA, occurring mainly in near coastal environments from Kalbarri (N of Perth) to Israelite Bay (E of Esperance).

Around Esperance it is reasonably common in boggy ground along creeks and seepage zones and is often encountered growing with tall Melaleuca and Sedge spp. Here it can form open shrubs to 3 metres (10’) in height, or lower rambling forms to half that height that protrude above compact sedge colonies. The white flowers with purple spots can bloom for extended periods between May and January, but it is the foliage that distinguish the species.

Although the leaves can vary considerably in size, they are finely toothed especially in the upper half, plus gradually taper to the base. The only other local species M. tetrandrum could be confused with, is Myoporum velutinum a rare species (east of Cape Le Grand) with hairy foliage and the only species to have hairs on the outer corolla (petals and floral tube).

A study of Myoporum tetrandrum published in the Australian Veterinary Journal (Vol. 54, Issue 6, June 1978) found that the essential oils in the foliage were toxic to stock and eventuated in lesions forming on their livers. The common name of Boobialla is thought to be a Tasmanian Aborigine word for Myoporum plants, but was also used to describe an Acacia species with edible seeds, which some references have incorrectly applied to Myoporum tetrandrum that is not edible.

The genus Myoporum is part of the large Scrophulariaceae family, but some references may still use the previous family name of Myoporaceae.