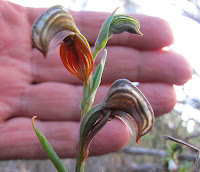 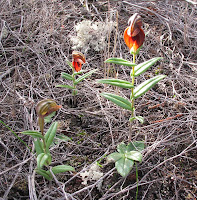 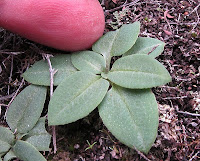 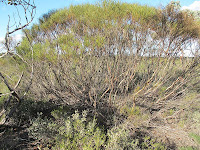 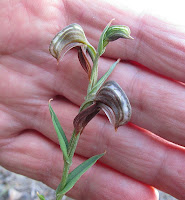 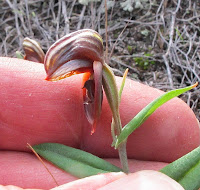 
Around Esperance this orchid is more common in the Mallee a little inland, although can also be encountered in coastal regions. Locally it tends to favour growing under mallee type eucalypts (as shown above), which with its dappled sunlight provides shelter from the weather and probably grazing animals like kangaroos, although it is known from other habitats elsewhere.

It is very similar to the more coastal Banded Greenhood and was classified as Pterostylis vittata until 1989. To help distinguish the two, the Dark Banded Greenhood has a very broad (almost circular) sepals, which apart from the turned up lip around its upper edge, is flattish and not dish-shaped like the Banded Greenhood. The difference is an important distinction, as this species can be quite variable color-wise and in some instances green forms are also found.

The Australian distribution of Pterostylis sanguinea is from Kalbarri 500 km (310 miles) north of Perth in WA, through the Wheatbelt (excluding the SW corner), sweeping around the southern region into SA, where common and ranging from the Eyre Peninsula to SE Victoria and even spreading to NE Tasmania where listed as rare.  http://avh.ala.org.au/occurrences/search?taxa=Pterostylis+sanguinea#mapView

Flowering in WA is recorded from June to September, but this will vary a little depending on distribution and seasonal rainfall. Locally, May to August would be more usual.

The Pterostylis genus is listed here under Orchids.