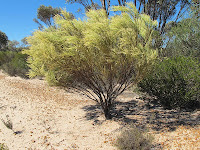 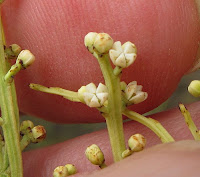 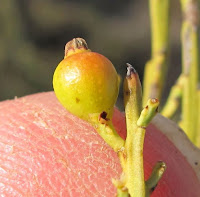 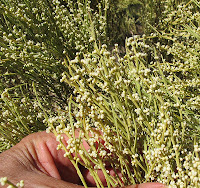 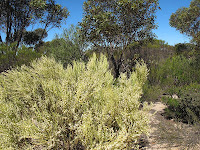 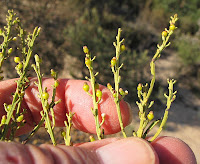 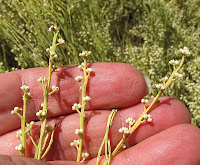 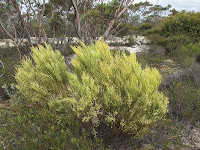 
The Common Sour Bush is a soft compact shrub to 2 metres (little over 6’) in height, with slender leafless branches that sway attractively in the wind. It is related to Exocarpus (Ballarts) and Santalum (Quandong) and like them is a semi-parasitic (hemiparasite) partially feeding from the roots of surrounding vegetation, but unlike mistletoes they are not wholly dependant on them for nourishment.

Generally these shrubs are easy to spot in the bush, as their fine supple branches are characteristically coloured lime/green to cream, making their numbers and distribution not difficult to determine. In the Esperance district they are usually found growing in a variety of soils away from the coast in the mallee region. Their distribution elsewhere in WA (also listed for SA. Vic. and NSW) is from 80 km (50 miles) SSE of Perth to Albany and East to Mt. Ragged (NE of Esperance), where widespread but mostly found as individual plants or in small groups.

The leaves are reduced to scales and the tiny white flowers (with this species) are in small clusters on a common peduncle (stalk). There is a very similar species but with yellow flowers called Choretrum chrysanthum, which initially was classified as a variety of Choretrum glomeratum. This plant is now regarded as a distinct species and although Herbarium collections are sparse, they apparently occur a little further north and outside the range of Choretrum glomeratum.

A related and similar looking genus (Leptomeria) can be confused with Choretrum, but distinguished by the scale-like floral bracts, which with Leptomeria are single and soon fall (deciduous), whilst with Choretrum they are numerous and more persistent (see photos).

Flowering is highly variable and plants can be encountered in bloom at almost anytime depending on local weather conditions, although individual plants will seldom bloom longer than 3 months in any year. Small greenish mistletoe-like berries are produced, which birds especially Emus readily consume and in the process are probably responsible for most seed dispersal.

In WA the Choretrum genus has 4 species and is a member of the Santalaceae family.