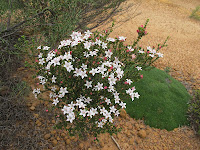 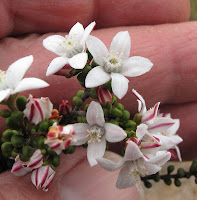 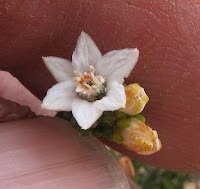 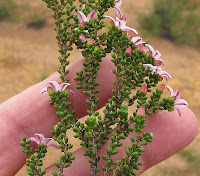 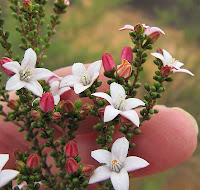 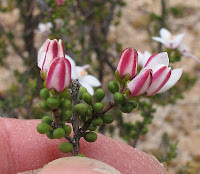 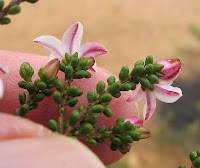 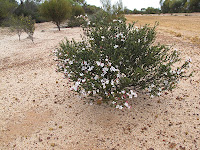 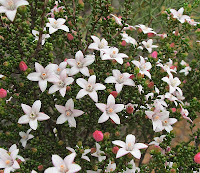 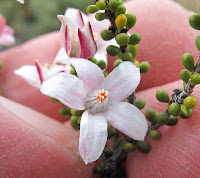 
The Philotheca genus is very closely related to Eriostemon, the main difference is the number of full length nerves on each petal, with Eriostemon being multi-nerved, whilst Philotheca has only one that may be branched (best seen on the underside). In Western Australia (and for most spp. elsewhere) all plants previous classified as Eriostemon have now been transferred to Philotheca, leaving only two Eriostemon spp. in the Eastern States.

Philotheca gardneri has two subspecies with the other subsp. gardneri having longer warty leaves and being more widespread in SE WA, whilst subsp. globosa is restricted to an area 200 km or 125 miles in length from Lake Grace to Lake Tay (140 km or 85 miles NW of Esperance). It is not well known and has a Conservation Code Priority One rating, which means it is recorded from less than 5 populations and may be at risk. Around the Lake Tay region and 40 km further east, I have encountered several colonies, but on gravel soils and not sandy ones as recorded for this species. The size of the colonies however were less than 100 plants, with each being very localised, but due to the areas remoteness and lack of development, it is probably more widespread.

Plants grow in mallee heath and are reasonably compact, growing to around ½ metre (18”) in height, which when combined with the pink/red buds, numerous long-flowering 1 cm (3/8”) diameter waxy white flowers and the unusual small 2 mm (1/16”) globular leaves, makes this a most attractive and interesting looking species. Flowering is recorded from May to July, although my records have it in bloom from May to late September.

Philotheca is part of the Rutaceae family.