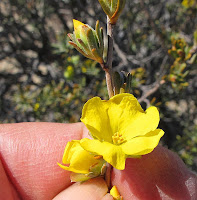 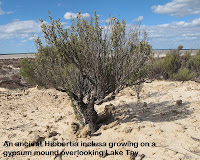 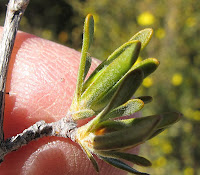 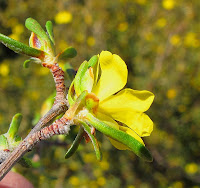 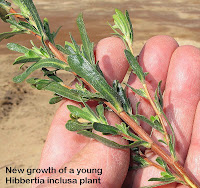 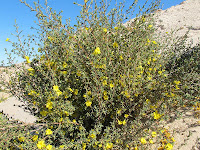 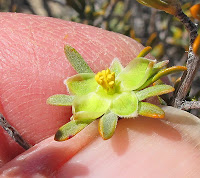 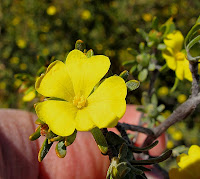 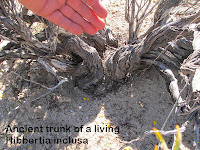 
There are in excess of 100 Hibbertia species in Australia and several more overseas. They are found in all States and have flowers that are mostly a bright golden yellow, from which the common name of Guinea Flower originates referring to the Golden Guinea coin. They are generally viewed as short-lived perennials and/or small garden ornamentals, but that is certainly not the case with this species.

Hibbertia inclusa is a very tough plant and in the Esperance NW region, grows around saltlakes often on dry gypsum mounds where few other plants can survive. Consequently, these areas are usually open and exposed, but such conditions are nevertheless a distinct advantage in fire prone regions, as having little fuel to burn and extensive gaps of bare earth between plants, they are less likely to be burnt.

It must also be borne mind that Lake Tay (where photographed) the average rainfall is only 20-30 cm (8”-12”) a year. This coupled with an exposed sandblasted position, plus the normally powder dry gypsum soil, the rate of growth will be slow and only done in short bursts after good rainfall. Nevertheless, Hibbertia inclusa in these conditions grows to a ripe old age to which the old gnarled trunks above testify.

Hibbertia inclusa is a shrub to around a metre (3’) in height, with olive green foliage when mature and bright yellow flowers that bloom anytime (depending on rainfall) between July and November. It is a WA endemic and has a scattered inland distribution from NE of Esperance to the southern Wheatbelt near Wagin, then north to Moora. The harsh Lake Tay environment is not necessarily duplicated in these other areas, particularly those with higher rainfall, so such ancients as shown above, may not always develop.

In less extreme environments, Hibbertia inclusa can grow quite quickly to colonise areas that have been burnt or when existing vegetation has been destroyed and may even occasionally spread further afield to colonise other habitats.

Hibbertia is the largest Australian genus in the Dilleniaceae family.